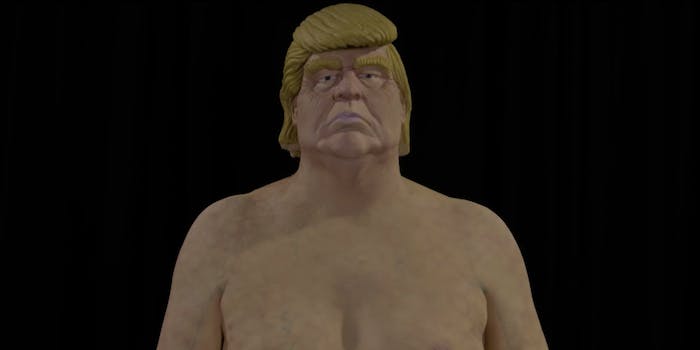 Naked Donald Trump statues are being erected in cities across America

When art gets ugly.

It really feels like Donald Trump appeared out of nowhere to enter the presidential election. Now statues made in his likeness are also popping up in cities across the United States.

And holy shit, they’re Donald in the nude.

Cities graced with these mysterious pieces of art include San Francisco, New York, Seattle, Cleveland, and Los Angeles. They all depict the presidential hopeful in the buff with his hands (which appear to be normal people-sized) crossed over his protruding belly and a dissatisfied look on his face. Oh and most importantly, the statues have small dicks and no balls.

@TuckFrumpUSA hey guys check out this naked statue of Donald trump that's up in Seattle. Just saw it this morning pic.twitter.com/CbT7DUHvz8

It's sad as a fat old white man that despite how flabby and hideous your body is, your policies are still more disturbing @realdonaldtrump

The moment of law and order. pic.twitter.com/GS2BOWx1Yn

The statues are part of Anarchist group INDECLINE‘s “The Emperor Has No Balls” project. But to help actually make the statues, it employed the help of a Las Vegas-based artist named Ginger. He was reportedly selected because of his experience with creating monsters for haunted houses and horror movies.

Ginger told the Washington Post, “Trump is just yet another monster, so it was absolutely in my wheelhouse to be able to create these monstrosities.”

It took 300 pounds of clay and silicone and 25 hours per week of work since April to create the ghoulish figures.

INDECLINE also told the Post, “Like it or not, Trump is a larger-than-life figure in world culture at the moment … Looking back in history, that’s how those figures were memorialized and idolized in their time—with statues.”

While the statue is still up in cities like San Francisco, Patch reports that the statue was removed from New York City’s Union Square just after 1pm ET on Thursday. But by then, of course, pictures already began circulating on social media.

Oh man. This is a REAL statement from NYC Parks on fake naked @realDonaldTrump statue in Union Square via @NPRnie pic.twitter.com/HNewy7fV9X

This isn’t the first time that Trump’s naked, micro-endowed figure has been used for an artistic statement. Earlier this year, artist Illma Gore illustrated a similar image and posted it online.

Looks like all these artists are on the same page about Trump’s dick size.