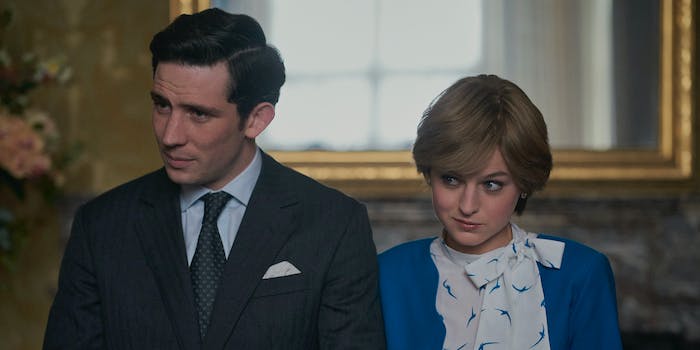 There's something entirely recognizable about it.

Apart from showing a new generation just how horrible Margaret Thatcher was as the U.K.’s first female Prime Minister, The Crown’s fourth season is providing insight into the terrible treatment Princess Diana received from the Royal Family—particularly Prince Charles and Camilla Parker-Bowles—when she joined it. (The Royal Family is reportedly not happy about the portrayal of Charles and Diana.) But you don’t have to wait long to see some of that awkward discomfort on-screen, or as a new meme remixed it, something extremely relatable.

Charles and Diana’s joint press conference to announce their engagement in February 1981 is available to watch on YouTube. Knowing what we do now, it’s easy to see just how uncomfortable they both are; they look like they’d rather be anywhere else. The third episode of season 4, “Fairytale,” faithfully recreates the outfits that the real Charles and Diana (played by Josh O’Connor and Emma Corrin on The Crown) wore during that press conference. While some things differed in the dramatic depiction—mainly, Diana’s body language—it’s almost eerily spot-on.

Diana is shy and bashful throughout the interview, offering a polite smile at both Charles and the merciless cameras during much of the interview. Her expressions vary, almost as if she’s already conscious of how she’s already being perceived.

But when Wayne David, a part-time DJ based in London, watched the scene, he saw something in it: a reaction meme.

“In isolation it really made me laugh for some reason,” David told BuzzFeed.

And he’s far from the only one. David’s 17-second clip of Diana’s smile that edges on awkward and a bit creepy, clearly caught on as others made their own commentary on Diana’s smile.

And Diana’s fidgeting is even more relatable in our new normal of work meetings as we become more aware of how we look on-camera.

For David, he’s just impressed with the variations that everyone came up with since his own.