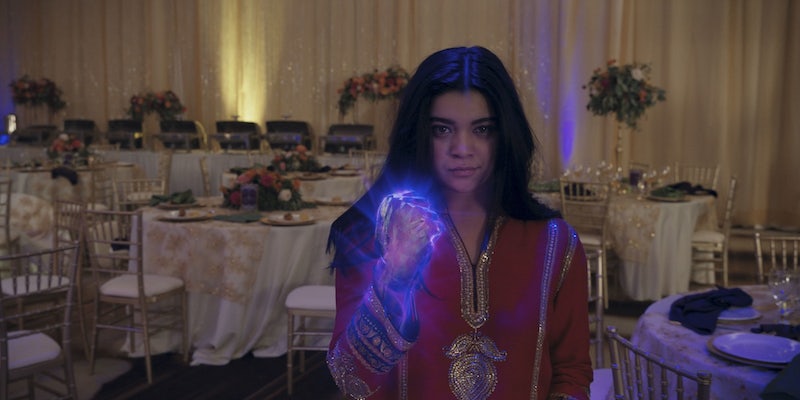 ‘Ms. Marvel’s 2 worlds come to a head in episode 3

Things come to a head at Kamala's brother's wedding.

Seven shows in, the MCU’s array of Disney+ shows tend to have a bit of a structural familiarity to them, for better and for worse: They tend to save much of the heavy lifting, both in terms of emotional and exposition, for the penultimate episode, making what came before seem like killing time. Ms. Marvel, now halfway through its six-episode run, still has much more to unveil, but the emotional throughline for its characters remains strong as the personal and the supernatural collide.

On multiple occasions, the various characters in Kamala Khan’s (Iman Vellani) life stress the importance of being able to lean on your family and your community in the face of fear and isolation. Her older brother Aamir (Saagar Shaikh), stressed over how little money is in his bank account just before his wedding to Tyesha (Travina Springer), is told by his father Yusuf (Mohan Kapur) that he’s brave because he chose love over fear. “You are brave, my son. Because you have chosen family. And the man who chooses family is never alone.” In recounting how hard it was for her and Yusuf after they moved to America, Muneeba (Zenobia Shroff) tells Kamala how vital the community she found in their local mosque was. That community is such a lifeline that for an auntie, traveling 28 hours with four connections just to get to Aamir’s wedding is no burden at all.

While Kamala has Bruno (Matt Lintz) on her side, her abilities are isolating her from the community she loves. She almost opens up to Nakia (Yasmeen Fletcher) about having powers, but Nakia’s vent over the Department of Damage Control (DODC) showing up at the masjid to search for “Night Light”—and how the DODC expected the masjid to surveil themselves—stops her. Even Bruno, who promises to help her when he can, is starting to step away a bit after saying he wants to go to Caltech.

On paper, a character refusing to open up despite everyone around her insisting she’s safe can be a frustrating story to see play out because it happens over and over again. For Kamala, it’s easy to understand why she wouldn’t. She sees her community’s reaction to her masked persona and hears that whoever Night Light’s mother is should be ashamed. Vellani’s expressiveness shows the conflict on Kamala’s face. If she were to reveal herself to her family and friends who are facing inquiries over her, would she be ostracized? Can she be good if she keeps causing so many problems in her wake? Are her powers actually more of a curse?

Asking for advice, Sheikh Abdullah (Laith Nakli) says she’s looking at it the wrong way while looping in one of Ms. Marvel’s most famous comic book lines (and perhaps the thesis of Kamala Khan as a character). “Good is not a thing you are, Kamala. It’s a thing you do.”

Her attempt to do good this time doesn’t exactly go as planned. The episode is bookended by Kamala’s past with the cold open flashing back to British-occupied India in 1942 as her great-grandmother Aisha (Mehwish Hayat) gets her hands on the bangle in a temple that the British managed to miss during their previous looting attempts. She and her cohorts apparently need two bangles to accomplish their goal, but incoming British soldiers prevent them from locating the second bangle; Aisha’s friend Najma (Nimra Bucha), who we previously met as Kamran’s (Rish Shah) mother at the end of episode 2, tells her to run.

Decades later, Najma and the rest of the crew, only looking a little older than they did in the flashback, relayed the story to Kamala. The logic behind how that was possible pops in our heads just before Kamala—ever the superhero fangirl—asks it herself. Najma reveals that she, her friends, and Kamran are known as Clandestines (also known by a number of other names, most commonly Djinn), a group of powered beings from another dimension and can tap into noor, or light; one of the perks is that they don’t age as quickly as humans. More importantly, they’ve been exiled from their dimension to ours (where they’re unable to tap into their full abilities) and need Kamala’s help to get them home.

Bruno’s attempt to research interdimensional travel (including a paper from Dr. Erik Selvig from the Thor movies) doesn’t bear great news: It’s highly dangerous, and the research even undersells how dangerous it is. Kamran is sympathetic when Kamala asks for more time, but Najma is tired of waiting; she won’t even allow Kamala to get through a wedding.

The centerpiece of episode 3 is Aamir and Tyesha’s wedding and reception, a colorful and infectious display filled with decadent food, gossip (Bruno’s very popular with the aunties), a Bon Jovi cover band called Brown Jovi, and Bollywood dances that get just about every character on the dance floor and put Eternals’ attempt to shame. It’s almost a shame that Najma and the other Clandestines bust the party to force Kamala to help them; with only a little warning from Kamran, Kamala pulls the fire alarm to get everyone out of harm’s way. It’s a decent fight sequence, but it also shows us another of Kamala’s powers: She can absorb energy when she gets hit, which she can then transfer into a powerful punch.

At the end of the episode, Kamala is more isolated than ever. Najma’s group is eventually neutralized by the DODC, but her family thinks she ruined Aamir’s wedding by pulling the fire alarm and being linked to the group. Nakia now knows what Kamala can do, but she’s angry that Kamala kept it from her this entire time. And a call from Sana (Samina Ahmad) imploring that Kamala and Muneeba immediately travel to Karachi, Pakistan will take her even further from many of the people she loves.