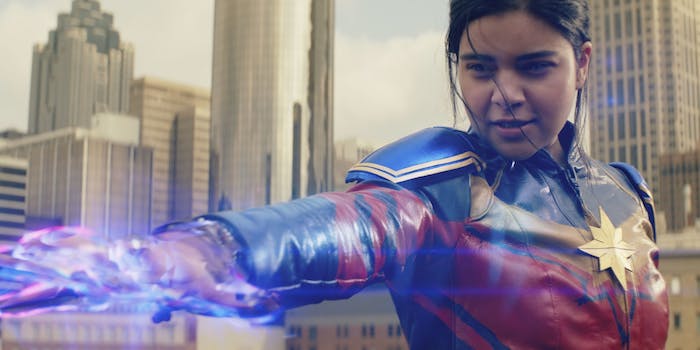 It expands her world without minimizing her life outside of her new powers.

Warning: This recap contains spoilers for the first two episodes of Ms. Marvel.

Sticking with the lighthearted tone of episode 1, Ms. Marvel episode 2 sees Kamala Khan (Iman Vellani), like any Marvel fangirl who suddenly has superpowers, test the limits of what she’s capable of. But Ms. Marvel wisely also doesn’t abandon the more interesting aspects of Kamala’s life in Jersey City as we see her face challenges that might be just as vital: An emerging family mystery, her local masjid’s upcoming board election, and a brand new crush.

Her powers, at least at first, aren’t the problem. Instead of being completely overwhelmed, it injects her with newfound confidence as she walks down her high school’s hallway—in a near-copy of the scene from the pilot with different results. Now, Kamala can dribble a basketball with no problem, stop another student from tossing the ball in her face, correct a teacher who’s been mispronouncing her name for years, and get in-between two girls sharing AirPods to get to her locker. (In the case of the AirPod sharers, Kamala tells them that she’s rooting for their relationship.)

As for everything else Kamala is able to do, it’s a lot of trial and error. During their lunch breaks and after school, she and Bruno (Matthew Lintz) try a number of tasks to see just how. While she initially mentions an array of Ant-Man’s abilities—her logic is that “we’re both charming and we look a lot younger than we are,” a nod to Paul Rudd’s apparent agelessness—they discover that she’s able to use the energy to create platforms to allow her to walk or run on air.

Bruno’s technological talents are on display as he’s able to determine that the bangle Kamala put on isn’t the source of her powers, but rather was the thing that unlocked those powers. He’s also facing a crossroads as he learns he’s been accepted into an accelerated Caltech program, with an advisor telling him that this is his big movie moment; of course, he has to choose Caltech.

His attempt to talk to Kamala about Caltech is in vain. She’s drawn to the school’s new transfer student, Kamran (Rish Shah), a senior whose car comes in handy when she, Bruno, and Nakia ​​(Yasmeen Fletcher) flee a party hosted by their popular classmate Zoe (Laurel Marsden). For Kamala, it’s crush at first sight as they bond over Bollywood movies—particularly which Shah Rukh Khan film is the best one—and their collective embarrassment over their respective crush on Kingo (a nod to Kumail Nanjiani’s Eternals character, who masquerades as a Bollywood actor and has been playing his own descendant for decades). He also gives her his number and offers to teach her to drive.

For Kamala, her budding connection with Kamran—which she tries hiding from her brother Aamir (Saagar Shaikh) by saying he’s a cousin by marriage when he happens upon them, although his fiancée Tyesha (Travina Springer) seems to know what’s up—bursts to life with soft hearts emerging behind her and a downright euphoric lip-sync of The Ronettes’ “Be My Baby,” a perfect view into the all-encompassing feel of a first crush.

Episode 2 also gives us a glimpse into Kamala’s local masjid and the double standards on display in front of her and Nakia (Yasmeen Fletcher) during the imam’s lecture. It’s not that people are separated by gender throughout the service, it’s that the side of the room designated for men and boys is in much better condition than the side for women and girls, which is threadbare and in a state of disrepair; afterward, Nakia discovers that someone stole her shoes, something that the masjid board hasn’t seen fit to care about. Kamala encourages Nakia to run for the masjid’s board to enact that change herself and sees the upcoming Eid Mubarek celebration as the perfect place to campaign because the only things to do there are eating food and gossip.

In Kamala’s case, the Eid Mubarek party is also a chance for her to question the “Illumin-Aunties” about what they might know about her great-grandmother Aisha, to whom her bangle originally belonged. But questioning her family leads to dead ends: Her maternal grandmother Sana didn’t want to talk about her mother at all, and Muneeba (Zenobia Shroff) tells her that Aisha “brought shame onto the entire family” and that she had to move halfway across the world to escape it. But whatever Aisha did is still whispered in hushed tones among the “Illumin-Aunties” as they suggest that Aisha had an affair, had multiple affairs, had a secret family, and even killed a man during Partition. (One auntie says that her father called Aisha a snake and “she put a curse on everything she touched.)

For now, Kamala might have to put that on the backburner. Her latest display of powers, which she uses to save a boy who fell out of a high window (although it nearly ends in disaster after she loses her concentration long enough for her energy platform to vanish, goes viral and once again catches the eye of the Department of Damage Control. P. Cleary (Arian Moayed) and Sadie Deever (Alysia Reiner) question Zoe about the AvengerCon incident, which prompts them to sweep every temple, masjid, and other places where South Asian people might congregate in the tri-state area; in a rare, if clunky, acknowledgment of the realities that many Muslims in the U.S. face in that the FBI is already keeping tabs on the masjids. Kamala runs into the DODC’s drones, but she’s able to get away thanks to some quick thinking and Kamran’s getaway car that rolls up in time to drive her away.

In the comics, Kamran is an Inhuman whose powers (which involve bioluminescence) were revealed in the same Terrigen mist that unlocked Kamala’s abilities. It’s too early to tell if he also has superpowers (or if he will betray Kamala, as his counterpart does), but the episode’s final moments show us that there’s more to Kamran than meets the eye. In the backseat of Kamran’s car is his mother—the same woman that Kamala saw in a vision that made her lose her concentration.

“Kamala, I’ve been waiting a very long time to meet you,” she says, a greeting that could be a salve or spell a greater danger. Knowing Marvel, it could easily be both.