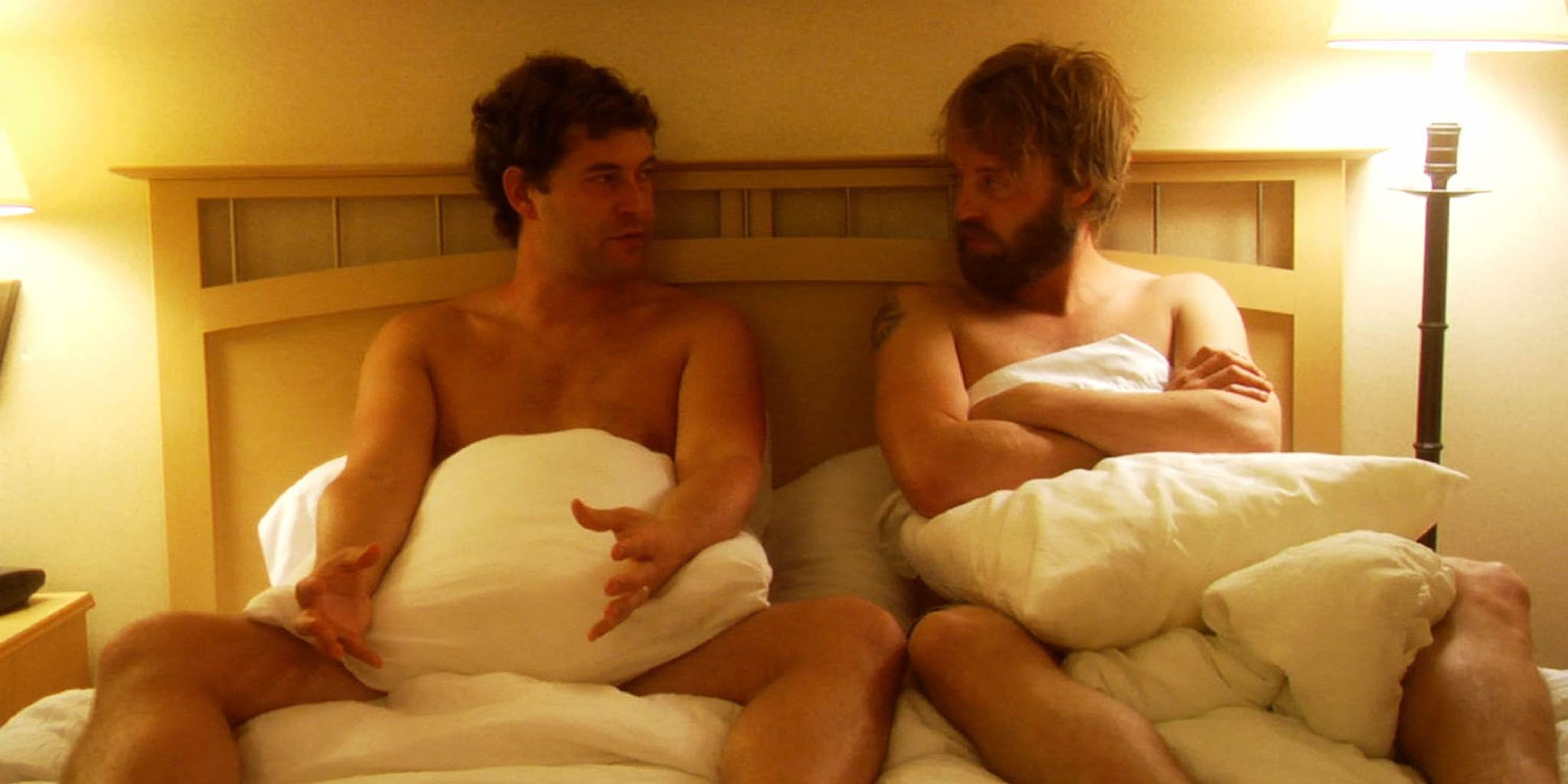 Why men’s sex lives are more complicated than you think

From the booty-eating revolution to curious guys on Tinder, male sexuality is messy.

A straight guy licked my face once. It was in high school between classes and I was at my locker, running late as always. One of the guys from our school’s soccer team walked up to me, which I thought was unusual. We weren’t friends exactly, friendly enough to say hello in the hallway but not make time for conversation, and definitely not friends enough for a full stop. I turned from my books, and before I knew it, his saliva was smeared all across my cheek. Intrigued but totally unprepared for this, I quickly yelped, “No, I can’t,” and scuttled the other direction. We barely talked for the rest of high school.

To be honest, I’ve never found labels to be all that descriptive of sexuality as I know it.

That guy is married to a woman now, as is the first guy I hooked up with, and a lot of the mostly heterosexual men I was a little more than friends with in high school. There’s a scene in Donna Tartt’s masterful The Goldfinch that sums up these experiences well. Theo and his best friend, Boris, take in more than their fair share of drugs and alcohol as kids growing up outside Las Vegas, and to use a phrase, “Shit happens.” Reflecting on it later, Boris tells Theo, “We were young and needed girls. I think maybe you thought it was something else.” For me, it was “something else”—I’m currently in a relationship with a man, but I would identify myself as “queer,” “mostly homosexual,” or “bisexual, I guess.” To be honest, though, I’ve never found labels to be all that descriptive of sexuality as I know it.

In a recent study for Mic, Eliel Cruz put men’s capacity for sexual fluidity to the test. “A gay friend of mine told me that he had slept with a ‘straight’ guy using Tinder by changing the stated gender on his profile to female,” Cruz writes. His friend kept all the same photos and info, but the guys of Tinder “still swiped right and started chatting with [him].” Skeptical that something like this would work, Cruz did the same to call B.S on his story.

While Cruz claims that “swiping right on a guy made some men freaked out and defensive,” others were surprisingly into it. Cruz reports, “Men complimented me, telling me I was ‘hot’ or ‘handsome.’ I got asked for sexual favors along the lines of ‘I’m not gay but I’d let you blow me.’ Some even went as far and asked to have sex with me as long as I didn’t do other ‘gay shit.’” While some of these men said they were “possibly bisexual,” other men Cruz chatted with were “afraid to use that label.” Cruz continues, “There were men who publicly identified as straight who were up to trying new things and testing the boundaries of their sexuality, sometimes with a witness/participant.”

This anecdotal evidence clashes with the longstanding conventional wisdom on male bisexuality—which has sought to debunk it as a lie perpetrated by men who are on the road to Kinsey Sixville. A controversial study reported on by the New York Times in 2005 “lends support to those who have long been skeptical that bisexuality is a distinct and stable sexual orientation.” The Times’ Benedict Carey continued, “People who claim bisexuality, according to these critics, are usually homosexual, but are ambivalent about their homosexuality or simply closeted. ‘You’re either gay, straight or lying,’ as some gay men have put it.”

Bruno Mars has yet to send “I Kissed a Boy” to the top of the Billboard charts.

Even sex columnist Dan Savage has contributed to this idea. During an interview for the documentary Bi the Way, Savage said, “I meet someone who’s 19-years-old who tells me he’s bisexual and I’m like, ‘Yeah, right, I doubt it. I tell them come back when you’re like 29 and we’ll see.’”

Savage has since changed his stance on the issue, but as CNN’s Ian Kerner notes, “society is a lot less accepting of male sexual fluidity” than for their female counterparts. In a 2013 study from the Pew Research Center, LGBT Americans reported far greater acceptance of bisexual women than men, with 33 percent claiming that there’s “a lot of social acceptance” for women who identify outside the binary, but only 9 percent saying the same about men. According to New York magazine’s Ann Friedman, there may be a degree of biology to this divide, but a larger part of the influence is cultural mores about sexuality. Friedman writes, “Probably thanks to ‘lesbian until graduation’ stereotypes and ‘I Kissed a Girl’-style odes to superficial experimentation, we’re more comfortable with women whose sexuality is harder to define.” After all, Bruno Mars has yet to send “I Kissed a Boy” to the top of the Billboard charts.

While last year’s news surrounding actress Maria Bello’s decision to come out without labels was greeted with polite applause, the reaction to swimmer Tom Daley was far more hostile. Friedman writes, “These were the people who assumed Daley was gay but unable to fully admit it, or unwilling to relinquish the privileges of being straight. He was called greedy and accused of trying to have it all. (Which is baffling. It’s not as if he’s dating six people at once.)” Daley did later clarify his preference, saying “I am a gay man now,” but in some circles, that admission likely only confirmed more stereotypes about bisexuals being fence-sitters. The reality is that a majority of LGBT folks’ orientations change over the course of their lives. According to blogger Leh Miller, “84 percent of women and 78 percent of men [report] that they had changed their sexual identity label at least once.”

And some, like Bello or actor Josh Hutcherson, might be hesitant to label at all. Hutcherson defines himself as “mostly straight,” reflecting a new open-mindedness when it comes to an emerging generation of young men. Hutcherson said, “Maybe I could say right now I’m 100 percent straight. But who knows? In a f**king year, I could meet a guy and be like, ‘Whoa, I’m attracted to this person.’ … I think defining yourself as 100 percent anything is kind of near-sighted and close-minded.”

Josh Hutcherson defines himself as “mostly straight,” reflecting a new open-mindedness when it comes to an emerging generation of young men.

The petite Hunger Games heartthrob isn’t the only famous male celebrity to shrug at the idea of orientation. During an interview with On Demand Entertainment, One Direction members Harry Styles and Liam Payne were asked about what they’re looking for in a mate. Payne quickly said, “Female, that’s a good trait.” Styles scoffed,  “Not that important!” When pressed to label as “bisexual” in a profile for GQ magazine, he appeared on the surface to debunk any rumors about his sexuality. “Bisexual? Me?” he responded. “I don’t think so. I’m pretty sure I’m not.”

What’s interesting about Hutcherson and Styles is the growing non-answer answer, primarily because so much of sexuality takes place outside of our definitions. A Reddit thread posted last year polled men on their experiences of sexual fluidity, and the results were oddly reminiscent of Donna Tartt. “[I]f I ever settle down, it’ll most likely be with a woman,” one Reddit user comments. “In the meantime, guys are in far greater supply, the sex is incredible, and the emotional strings are practically nonexistent.” Another replies, “I identify as heteroflexible. I’m attracted to women but willing to do stuff with men, usually in group activities.”

As we can see here, bisexuality is only part of the picture when it comes to subverting the gay/straight divide; a growing number of people are choosing more-inclusive labels like queer, pansexual, and omnisexual. To match its users’ spectrum of preferences, OkCupid recently expanded its sexuality options to include a variety of labels, including asexual, homosexual, and the controversial term sapiosexual, which means you’re attracted to intelligence. But this is just the tip of the iceberg. “Fritz Klein, the doctor who founded the American Institute of Bisexuality, released the Klein Grid in 1978, which analyzes seven aspects of sexual orientation in people’s past, present, and ideal lives, for 21 possible combinations,” writes the Advocate’s Trudy Ring.

According to Dr. Lisa Diamond, the blurred lines of sexuality are true for both men and women and those who self-identify as gay and straight. Diamond surveyed 179 men and 159 women about the realities of their sex lives, and the results may surprise you. As Leh Miller reports:

While Friedman suggests that pop culture has long paved the way when it comes to promoting conversations about the female half of these statistics, it’s just starting to catch up to male sexual behavior. Two Sundance movies, The Overnight (featuring Parks and Rec’s Adam Scott and Orange Is the New Black’s Taylor Schilling) and The D Train (starring Jack Black and James Marsden), feature mostly straight men unapologetically having gay sex. BuzzFeed’s Louis Peitzman caught these movies at the festival and found them to be quietly revolutionary. “Sex, whatever the context, is what it is,” Peitzman writes. “It’s not so much about why sex happens but that it does: Sometimes the closeness between two male friends takes a turn, a reality that straight men nervously distance themselves from, and that is rarely depicted on-screen.”

The more we allow ourselves to be human and messy, the happier we’ll all be.

This poll came out a solid two years before Gawker declared 2014 the year of the “booty-eating renaissance,” when rappers like Trick Daddy and Kevin Gates openly declared their love for the bedroom taboo. While men have started to become more open about their willingness to be on the giving end of anilingus—as in a recent Girls episode in which Marnie enjoys a salad tossing—Gawker’s Tyrone Palmer notes that there remains stigma about guys getting rimmed. “The paranoid anxiety that having your booty eaten as a male makes you gay is prevalent in discussions about eating the booty among heterosexuals,” Palmer writes. The knowledge that Drake allegedly likes it when his partner goes down there isn’t confirmation that he’s part of the revolutionary avant-garde; according to Gawker commenters, it makes him a “gay ass n***a.”

Therein lies the problem. While sexual behavior may be changing in practice—as straight men find themselves looking at gay porn or getting turned on by M4M Craigslist postings—men at large continue to get hung up on labels, whether they happen to be gay, straight, or somewhere in between. Is enjoying anilingus a bad thing? Does looking at another man make me gay? No and no, not any more than going to a Bar Mitzvah one time makes you Jewish. The more we stop relying so much on rigid notions of masculinity and gender and allow ourselves to be human and messy, the happier we’ll all be—inside and out of of the bedroom.

Dudes of the Internet, the next time a cute guy licks your face on your way to class, just smile and say thank you if you’re kinda into it. You might be glad you did.