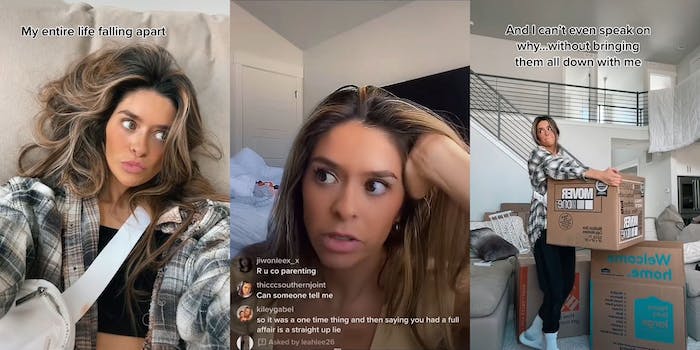 Utah MomToker Taylor Frankie Paul alleges her TikTok friends were ‘all intimate with each other,’ sparking a divorce

'No one is innocent. Everyone has hooked up with everyone in this situation.'

A popular Utah-based Mormon MomToker says her “entire life is falling apart” in a now-viral TikTok, later alleging on a TikTok live stream that her whole friend group was intimate with each other.

In the video posted by TikToker Taylor Paul (@taylorfrankiepaul) on Monday, she shows herself packing moving boxes. Text overlay on the video reads, “My entire life is falling apart. And I can’t even speak on why… without bringing them all down with me.”

The video is captioned, “This trend has impeccable timing,” and is set to the trending TikTok sound, “Brujeria,” in which users share stories of their unexpected misfortunes. The video has garnered over 4.2 million views as of Monday.

this trend has impeccable timing

In the comments, viewers speculated that Paul had a falling out with her friend group with other popular Mormon MomTokers, Camille Munday and Miranda McWhorter, referencing a thread in the r/TikTokgossip sub-Reddit that alleged that the group participated in “swinging,” or intimacy with each other’s partners in front of their primary partner.

“Taylor cheated on Tate with a mutual friend of the group,” one Redditor alleged in the thread. “Camille and Miranda obviously chose sides being they was ALL friends as couples. Don’t blame them. Cheating is uncalled especially when the wife that was cheated on was also supposed to be Taylor’s friend.”

Paul later went live on TikTok to explain the rumors, alleging that “the whole group was intimate with each other.”

She continued to allege that her husband, Tate, “made out with several girls” and that she made out with all of the husbands.

Paul also says that she and her husband are moving forward with a divorce after she “messed up” and “went all the way” with one person in their mutual friend group at a party without her husband or the other spouse’s knowledge, despite an agreement to only get intimate when everyone’s primary partner was there. She also alleged that there are “three divorces in the friend group,” with two being a result of the group’s falling out.

“No one is innocent. Everyone has hooked up with everyone in this situation,” Paul claimed in the live.

In a segment of the live posted by TikToker @violetangelsx, commenters slammed the group’s decision to be intimate with each other.

“This is why you spend your early twenties having fun partying experimenting and not getting married and having families to ruin,” one user said.

“Didn’t realize how toxic MomTok was,” another wrote.

“I’m not clear on how this would work to be in friendships with everyone and all hooking up,” a third added.

Others believe that Paul’s claims are part of the group’s attempt at gaining views.

“There’s TikToks talking about how their whole account is scripted and staged none of its real,” one commenter wrote.

“This is a reality show, Truman show style. None of this is real,” another said.

A third commenter said, “I feel like this is all lies and she’s going to say they are just moving.”

A few others referenced past videos in which Paul has “lied” for views, like when she claimed to be 50 with two twin daughters.

The Daily Dot reached out to Paul via Instagram.