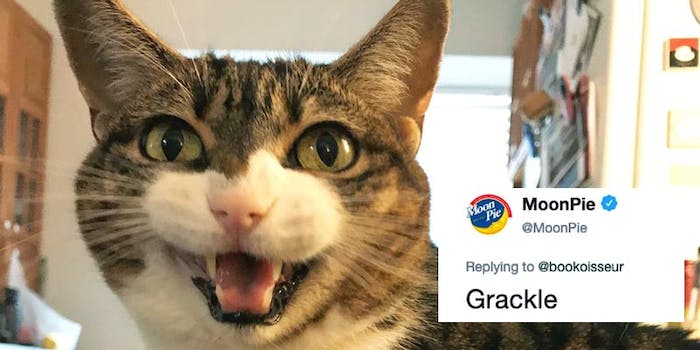 Spoiler alert: They're not all just named MoonPie.

Of all the #brand Twitter accounts, MoonPie just may hold the title of undisputed champion as the funniest and weirdest—dating back to when it gained attention for owning Hostess over a solar eclipse tweet in 2017.

MoonPie’s tweets typically have, at best, a wire thin connection to the product it actually intends to promote, which of course is exactly what makes them so delightful. (And yet, a strategy that has also proven successful in terms of sales.)

Such was the case on Tuesday evening when the account randomly tweeted, “Post a picture of your cat and I will guess its name.”

It terms of simple engagement, soliciting cat pictures is an easy win, and by Wednesday morning the account had over 8,000 replies. And true to their word, MoonPie got to work naming some freaking cats. Below are just a handful of some of the most clever and absurd examples.

Someone even sneaked in Goose the Cat from Captain Marvel, which was quickly dubbed “Wind Walker.”

Weird Twitter account @Darth, recently back from a self-imposed hibernation, was extremely here for the cat naming exercise—even if they were initially reasonably incorrect in guessing that MoonPie would name every cat “MoonPie.”

…and no body ever saw the photographer again https://t.co/vJ8co9kJy2

It may seem like kind of a weird flex for the social media account of a company that makes snack pies out of graham cracker cookies filled with marshmallow and dipped in a chocolate-flavored coating to get into the business of naming cats. But, clearly, people are here for it.

Maybe the future of MoonPie is in cat treats, and it seems as if they could clearly give Greenies, Whiskas Temptations, and Purina Friskies Party Mix a run for their money.