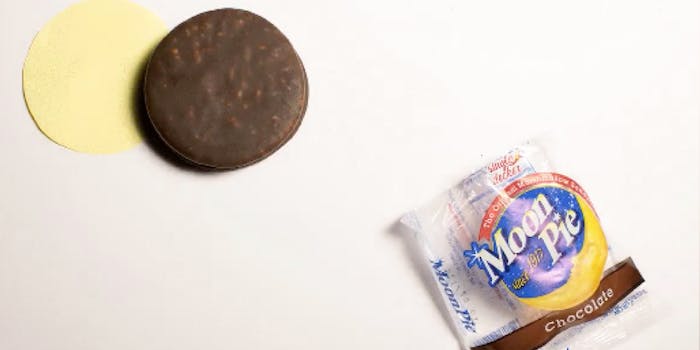 Total eclipse of the brands.

Monday brings us the first total solar eclipse in the U.S. since 1979, the first eclipse in the era of social media. Predictably, #brands were ready to capitalize on the event with some timely #marketing.

This is a boring part of the background noise of capitalism, and nobody really cares. Until the brands start fighting among themselves on Twitter. You may not be in the “totality zone” for the eclipse, but you’ve got a front-row seat for Hostess snack cakes getting owned by Moon Pie.

But it’s not a damn cupcake that’s blotting out the sun today, and Moon Pie wasn’t about to let Hostess forget it. Whoever runs Moon Pie’s social media accounts is having a very good day.

Hostess clearly did not see that coming. They never considered Moon Pie a legitimate threat. And, faced with a very good own from a smaller brand, they had to think quickly to defend their arbitrary position as “the official snack cake of the eclipse.”

"Cake" not pie. There’s enough moon to go around.

No one’s buying it. Moon Pie is not literally pie, and Moon Pie’s tweet has been liked 100,000 times. That’s more “likes” than Hostess has followers.

Just take the L and move on.

Even the U.S. Patent and Trademark Office is associating Moon Pie with Monday’s astronomical event.

Sometimes, you just have to admit you’ve been eclipsed.