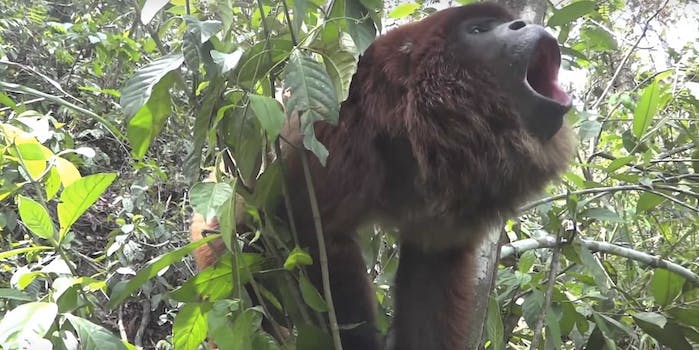 Monkey experiment suggests that men who catcall have smaller balls

Jacob Dunn, real scientist and lead researcher of the University of Cambridge’s Division of Biological Anthropology, has discovered what women have known for years: Males with small balls overcompensate for their shortcomings.

In a species of howler monkey, Dunn found that primates with louder roars have smaller testes and, consequently, less sperm. Explaining this reproductive trade-off, Dunn said, “When males invest in large bodies, bright colors, or weaponry such as horns or long canines, they are unable to also invest in reproductive traits.”

Now, I am not a scientist, but the parallels between obnoxious men who catcall, mansplain, and heckle, and these screeching simians is alarming. Although this is the first study to find a correlation between “vocal investment and sperm production,” as Dunn described, it’s safe to say our mammalian brethren, the howler monkey, may provide clearer insight into fragile masculinity.

Howler monkeys are “in a battle for reproduction geared more toward ‘sperm competition’,” the anthropological study noted. The howler monkeys that live in groups with other males tend to have smaller vocal organs and bigger testes, while the monkeys that are basking in a monkey harem, surrounded by ladies, tend to have larger vocal chords and itty bitty, teeny-weeny testes.

“It may be that investment in developing a large vocal organ and roaring is so costly that there is simply not enough energy left to invest in testes,” Dunn explained. But whatever the reason, rest assured that the next guy who bellows at you on the street most likely has raisin-sized balls. Because when it comes to reproduction, you really can’t have it all.