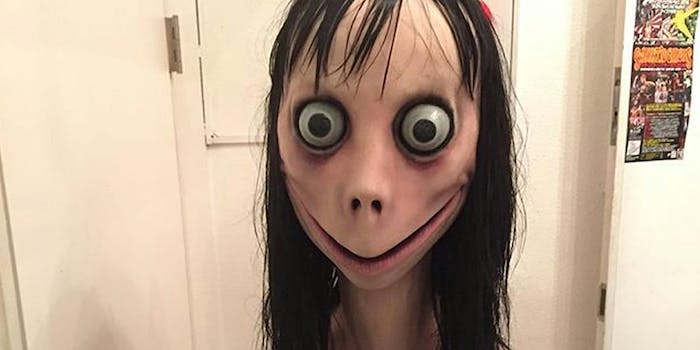 The memes, however, are forever.

Japanese artist Keisuke Aiso created the statue “Mother Bird” and exhibited it an art gallery in Tokyo back in 2016.

The sculpture didn’t receive much attention at the time, but after its image made its way onto Instagram and Reddit, it morphed into a urban legend. The character was given the nickname “Momo” and became associated with a so-called viral “challenge” where Momo supposedly encouraged young children to commit acts of violence or even commit suicide. While much was made of these reports, no actual incidents have violence have been traced to the “Momo challenge” and multiple sites have dismissed the whole thing as a hoax/urban legend.

Regardless of what was going on with image online, the statue itself is long gone, according to its creator. It was constructed of rubber and natural oils and was thrown out last Autumn when it began to degrade.

“It doesn’t exist anymore, it was never meant to last,” Keisuke Aiso told The Sun. “It was rotten and I threw it away. The children can be reassured Momo is dead— she doesn’t exist and the curse is gone.”

Keisuke says he has mixed feeling about his work’s viral fame.

“I created this artwork three years ago and at the time when it was exhibited at the gallery it did not receive much attention, so at the time I was very disappointed,” he said in the interview. “So when Momo first appeared, it was good in a way that it had received some attention. I was pleased. But the way that it has been used now is very unfortunate. People do not know if it is true or not but apparently, the children have been affected and I do feel a little responsible for it. I feel like I am in trouble but it’s all out of my hands.”

Keisuke mentioned he did keep one part of the statue before throwing the rest away: an eye he plans to reuse in a future sculpture which, let’s be honest, is pretty creepy.