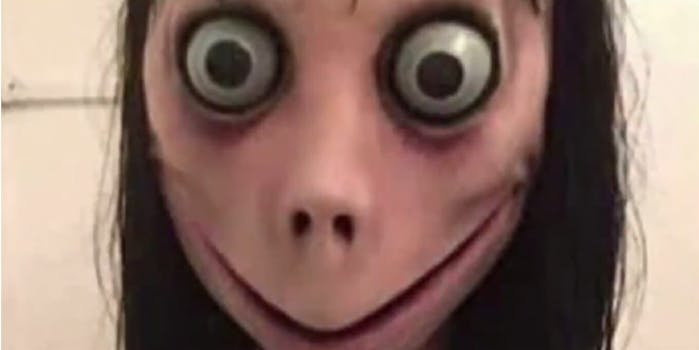 Fear of Momo is spreading.

Kim Kardashian warned her nearly 130 million Instagram followers to keep a close eye on what their children are watching on YouTube.

On her Instagram Story on Tuesday, the mother of three called on YouTube to take action over an online “suicide game” involving a terrifying character called “Momo” that reportedly encourages children to harm themselves.

People around the world have been sharing stories about the upsetting trend for weeks. The character has even reportedly cropped up on YouTube Kids, as well as WhatsApp and Fortnite streams. The YouTube Kids app, which is intended specifically for children, supposedly filters out inappropriate content, but this is not the first dangerous video splice to crop up in recent weeks.

The character appears part way through videos on YouTube Kids, according to stories shared online, to avoid being seen by parents initially screening their kids’ content. The Momo character—using the image of a Japanese sculpture called “Mother Bird”—reportedly begins the game with relatively benign challenges that quickly escalate. According to Facebook user Toni Jayne, the character “scares your kids in to (sic) saying nothing but doing dangerous stuff.”

A video shared by Twitter user @ataveiraa shows the sculpture, who has eerily wide eyes and an exceedingly creepy, inhuman mouth. In the video, a child’s voice sings, “Momo’s going to kill you, at night she’ll come when you’re in bed, in the morning you will be dead,” over an unchanging photo of the doll. (The Daily Dot hasn’t verified that this was on YouTube Kids.)

Dozens of stories have been shared online, inciting fear among parents: Tales of Momo telling children to put knives to their necks, to turn on the gas, or to take tablets. Momo initially cropped up on the internet in 2016, and in 2018 was used on WhatsApp as a suicide challenge.

Momo is likely far from the last dangerous challenge to threaten children and worry parents. But with Kardashian using her platform to get the word out, there are at least a few more parents taking precaution.