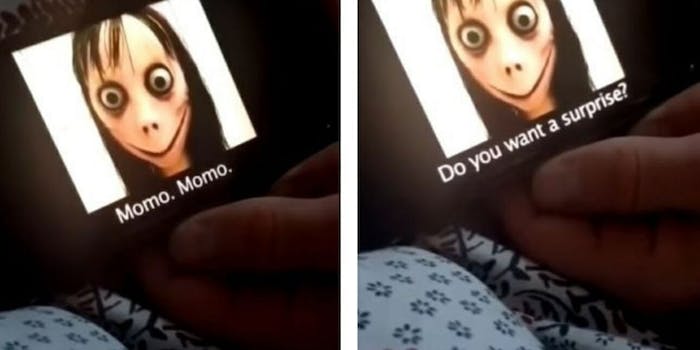 Even politicians are getting freaked out by the Momo challenge

The controversy continues to reverberate.

YouTube continues to insist there haven’t been any Momo challenge videos that violate its policies, and many online observers are insisting that the idea of a Japanese sculpture telling impressionable kids on social media to commit suicide is a viral hoax.

But people are continuing to freak about the Momo challenge, including one British lawmaker who reportedly discussed it in front of Parliament in England this week.

As Jim Watterson of the Guardian wrote on Twitter, “Tory [Parliament member] Douglas Ross has stood up in House of Commons and called for a parliamentary debate on the Momo challenge. Andrea Leadsom [the leader of the House of Commons] says the government is ‘extremely concerned’ about the Momo challenge. However, she refers to our reporting that there’s no confirmed threat to kids.”

Perhaps not, but a variety of schools and police departments in the U.K. and the U.S. have sounded the alarm about the potential threat posed by the Momo challenge, including the mother of an 8-year-old British boy.

“He showed me an image of the [Momo] face on my phone and said that she had told him to go into the kitchen drawer and take out a knife and put it into his neck,” Lyn Dixon told the Daily Mail. “We’ve told him it’s a load of rubbish and there are bad people out there who do bad things but it’s frightening, really frightening.”

Momo is the name given to a sculpture produced in 2016 by a Japanese special effects company that shows the head and torso of a woman with a creepy smile and bulging eyes mounted on bird legs. By 2018, a photo of the sculpture was reportedly being used to contact young WhatsApp users and to demand they participate in a viral challenge that could lead to suicide. If a person declined to participate, Momo then threatened to harm other people they know.

That, anyway, is how the legend goes.

Now, there are reports that the Momo challenge has infiltrated YouTube and the YouTube Kids app with innocent-looking children’s videos—for example, Peppa Pig– or Fortnite-themed content—and scaring the kids who are watching them.

YouTube told the Daily Dot on Wednesday that it doesn’t have any proof that the Momo challenge videos have been used to threaten anybody. YouTube also said it allows news reports and other analysis of the Momo challenge to be uploaded.

“Contrary to press reports, we’ve not received any recent evidence of videos showing or promoting the Momo challenge on YouTube,” a YouTube spokesperson told the Daily Dot. “Content of this kind would be in violation of our policies and removed immediately.”

After another request for comment from the Daily Dot late Wednesday, the platform reiterated that it isn’t aware of any policy-violating Momo challenge content.

Fact-checking website Snopes has explored the phenomenon, writing, “Word of the Momo challenge is now so widespread that whether or not it represents a real threat, the subject has generated rumors that in themselves can be cause for concern among children.”

But a YouTuber named DerekRants, who has 150,000 subscribers, purported to have an example. In his video uploaded Wednesday, he showed a clip of a girl singing along to a photo of the sculpture and how Momo was going to kill her.

It’s unclear where DerekRants found that footage, but the fact that more than 2.2 million have seen that video, since it was uploaded this week, shows how much Momo has permeated the minds of those on social media. Momo, for the time being at least, is a social media star, and politicians, police forces, and schools can’t stop talking about her.