Did Veronica Bobadilla just run away, or run afoul of a killer?

A missing-person case in South Carolina went from bad to worse yesterday when the family of 16-year-old Veronica Bobadilla received chilling texts from someone who claimed to have killed her.

When the Laurens, S.C., teenager disappeared around 4:30pm on Monday, her parents feared she was running away to Texas “to meet someone she had been corresponding with on Facebook.” Hours later, they opened text messages that read, “I’ve killed Veronica. Stop texting her.” One of Bobadilla’s friends said that she got a similar message on her Facebook account: “I killed Veronica ya’ll want [sic] find her.” 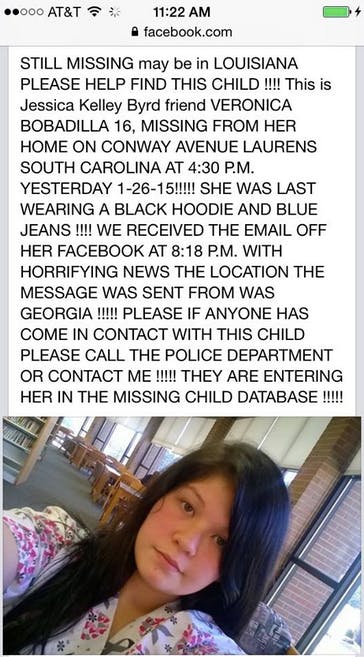 The Facebook message came from Lilburn, Ga., causing Laurens police to speculate that Bobadilla could indeed be traveling to Texas. Her mother said she had threatened to do so and “recently asked her uncle how long it would take to get there.”

In her last three Facebook posts, she tagged an Edwin Diaz—who lists Houston as his current location—saying that they were “in a relationship” and “DTF” (or “down to fuck”). 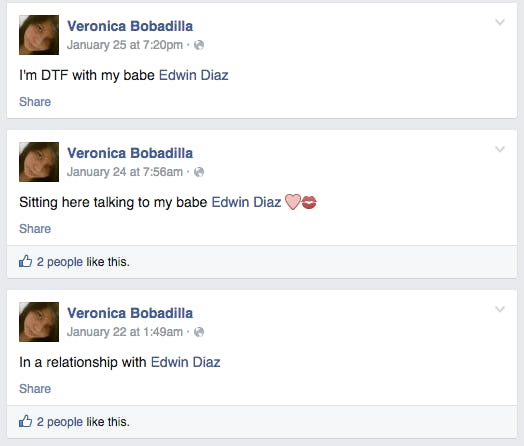 Bobadilla is 5’4″ and about 180 pounds, with black hair and brown eyes. She was last seen wearing a Laurens High School Raiders hoodie. Anyone with information on her whereabouts is encouraged to call 911, CRIMESTOPPERS at 1-877-682-7463, or the Laurens County Sheriff’s Office at 864-984-4967.