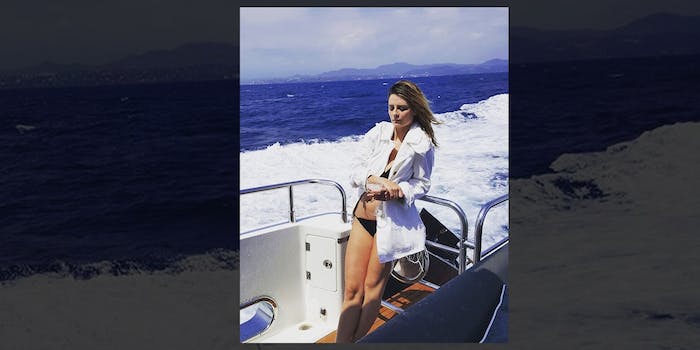 The former 'The O.C.' star is not taking this lightly.

Mischa Barton, a former Marissa on The O.C., is very concerned about the pattern of police officers killing black people in the United States, a pattern that continued this week when a cop repeatedly shot Alton Sterling in Baton Rouge.

Sterling’s death moved Barton so deeply that she had to take action—by posting a photo of herself on a boat.

Update 4:42pm CT, July 7: Welp, she deleted it, but of course it lives on in screenshots below. In the place of the original photo, please accept this relevant video.

“I’m truly heart broken to watch videos like the #altonsterling execution. This may have been going on forever in the United States but thank god the pigs get caught on camera now. Its unthinkable and an embarrassment to America,” wrote Barton.

Her picture backs up her words: She looks too upset to derive any enjoyment from that glass of wine, rad boat, or gorgeous scenery. She’s truly living her own advice to “#stop #reflect and #act appropriately.”

The well-earned snark is already flying:

And really, Mischa can’t win. On one side, you’ve got people pointing out the dissonance of her photo and her message, and on the other, you’ve got the “Blue Lives Matter” types who are upset at her for calling cops “pigs.”

You could say this was a huge misstep, or a case study in the essential narcissism of social media, and you’d probably be right. But in this case, you can’t blame Barton’s mistake for the flamewar brewing in her comments section. 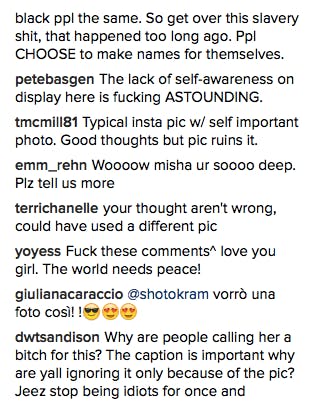 Even when celebrities aren’t being explicitly political on social media, they have so many followers that their comments have turned into a modern public square. Black folks trying to educate white people on issues of racialized police violence in Mischa Barton’s comments is just one example—witness the heated arguments about gay marriage in the comments of any random Ke$ha photo, or the referenda on Donald Trump everywhere.