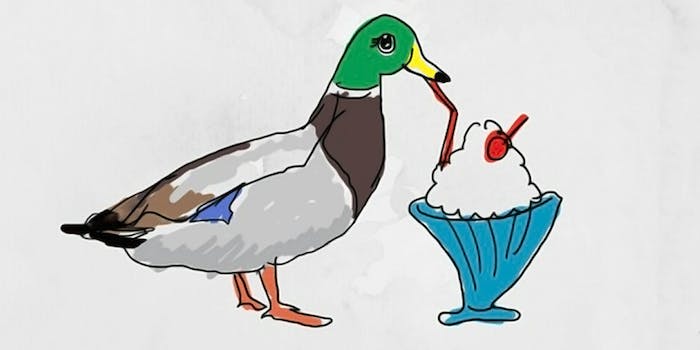 ‘Milkshake duck’ is this Australian dictionary’s word of the year

Australia’s Macquarie Dictionary is the latest dictionary to add obscure internet slang to its pages, making “milkshake duck” its word of the year for 2017, News.com.au reported Monday.

Last year, people on Twitter learned the phrase milkshake duck, which describes an internet celebrity who ruins their own reputation through bad (usually racist) behavior. The phrase started in 2016 with a joke by popular Twitter account @pixelatedboat, who was commenting on the rapid rise and fall of figures like Ken Bone and Chewbacca Mom:

The dictionary chose to define a milkshake duck as “a person who is initially viewed positively by the media but is then discovered to have something questionable about them which causes a sharp decline in their popularity.”

The choice of milkshake duck for word of the year befuddled many Australians who said they’d never heard of the phrase. That’s understandable, considering it’s mainly known to the U.S.-centric niches of weird Twitter and media Twitter. The original milkshake duck tweet was retweeted 31,000 times—modest by viral social media standards—and there’s no evidence that it was especially big in Australia.

@pixelatedboat—whose real name is Ben, according to his Instagram account—recently crossed into mainstream media again after people mistook a joke he posted for a real excerpt from Michael Wolff’s White House gossip book Fire and Fury. President Donald Trump did not spend hours watching a custom all-Gorilla TV channel created by his staffers, but when some prominent Twitter accounts failed to get the joke, the Gorilla Channel quickly became legend:

Wow, this extract from Wolff’s book is a shocking insight into Trump’s mind: pic.twitter.com/1ZecclggSa

For his part, Ben seems depressed by the earnestness with which people are treating silly Twitter jokes (but maybe secretly delighted at the audience they’ve helped build).

“I’m so sorry,” he tweeted after learning “milkshake duck” had been named Macquarie’s word of the year.

He also made light of his accidental specialty in bizarre catchphrases, joking about what he plans to do next.

You: Milkshake Duck, Gorilla Channel …. what’s next from the boat account???
Me: Horse …… pant

This whole situation is definitely a horse pant.