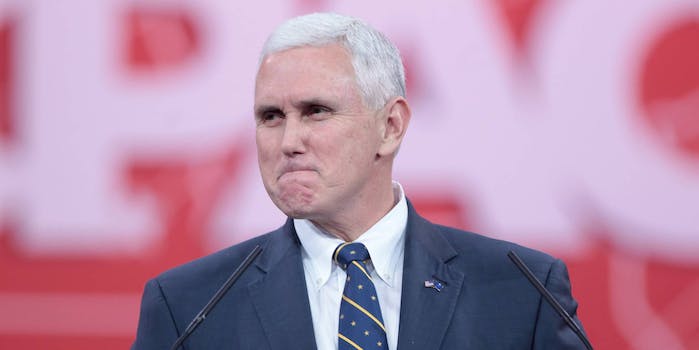 Donald Trump is in trouble. The presumptive Republican nominee has made the gravest mistake of his brief political career by tapping receding eyebrow activist and Indiana Gov. Mike Pence for vice president.

Between ham-handedly announcing his pick on Twitter and rolling out the most penetrative logo in American political history, the Trump campaign has faced immense scrutiny in its choices. The heat was on and only increasing once the time came to formally announce Pence on Saturday.

Trump took 45 minutes to get to the stage, then spent 80 percent of the press conference talking, followed by 15 percent of the event being B-roll of flags. It’s that five percent with Pence that’s simply annihilating the candidate, though. Within that time, Pence admitted he was basic.

He proved it over dinner.

Busy weekend in NY! Enjoying a quick dinner with the family at @Chilis. Looking forward to getting back to Indiana. pic.twitter.com/SUFjYcvQpH

As part of his whirlwind trip through one of the world’s greatest restaurant hubs, Pence and his family decided to dine at a chain restaurant with over 1,500 locations around the world, including five in Indiana’s capital city alone. Even worse? He subjected his family to the early bird special by dining at 4pm on a Saturday.

It wasn’t long after the dreaded dinner tweet that the social media backlash began flooding Pence’s mentions like a scalding skillet of Chili’s infamous queso.

Mike Pence ate dinner at a Chilis at 4pm. https://t.co/YXRtXorYge

.@mike_pence eating at @chilis in NYC reminds me of… pic.twitter.com/UVlFcUh8La

Of all the places in NYC @mike_pence went to @Chilis ?

Aside from the fact that Pence’s decision has clearly put the Republican ticket in jeopardy mere days before its national convention in Cleveland, his disastrous choice in dining only serves to further alienate thirsty GOP members similarly vying for that veep slot.

One can only imagine how pissed off glorified McDonald’s waiter Chris Christie must be feeling. The New Jersey governor can chow down with the best of them and supports the Donald’s need to clog his arteries on McDoubles and yet none of it was enough for the former presidential hopeful.

When it comes to fine dining, we all know the real MVP VP would’ve been John Kasich. The Ohio governor was the only candidate unafraid to roll up his sleeves and get to work demolishing the best meals that New York City has to offer. Pence’s tastebuds were apparently burned off in whatever disaster caused him to lose his eyebrows. His faulty palate is now the Republican party’s problem. Best of luck in November, guys.

Update 8:36am CT, July 17: While Mike Pence indeed dined in the NYC metro, he did not enjoy a hearty meal in the city itself. It’s presumed he either fled to the Staten Island Chili’s location or changed states entirely and raced to Jersey City. Probably the latter, as the Pence family had a flight to catch at the Teterboro Airport. Sad!