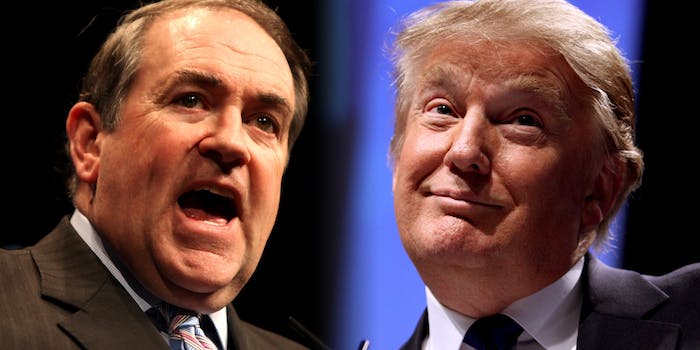 Huck won't back down on his Holocaust comments, and it's killing his campaign.

For months, we’ve all been getting it wrong. It’s been so easy, maybe too easy, to sit back on the Internet and have a good chuckle at the expense of Donald Trump, the bombastic, decidedly unapologetic GOP presidential frontrunner.

It’s an understandable urge. When you alienate an entire immigrant community in the first five minutes of your campaign announcement speech—the first five minutes of your entire political life, that is to say—you’re not exactly nurturing an aura of respectability. And yet, amid all the attention-sucking powers of Trump 2016, perhaps the ultimate no-f**ks-given Republican has been hiding right below our noses: former Arkansas governor Mike Huckabee.

On Sunday, Huckabee dove headlong into some pretty foul waters. In an interview with Breitbart, he suggested that President Obama’s support for the Iran nuclear deal would “take the Israelis and march them to the door of the oven.” It was exactly the kind of glaring, awful-taste remark for which you’d expect a firm apology later—or at least a gentle retraction. A candidate with any semblance of seriousness, you’d imagine, or even a simple sense of political self-preservation, would realize they had to get out in front of the gaffe.

However, in what’s beginning to look like a trend for the former Arkansas governor, he decided to push things further. On Sunday, with controversy and condemnation already swarming around his campaign, a tweet from his official account engraved the message in stone for all eternity:

For anyone whose last real experience with Huckabee came during his upstart 2008 campaign, his decision to flaunt such a wildly offensive claim might be a little startling. Back then, he’d managed to position himself as that rarest of creatures: a far-right evangelical who had a slick way with the media. A friendly, personable, down-home Republican who could engage with critics politely and civilly, in spite of his sometimes radical views on social issues.

When he dropped out of the 2008 race after finishing second in the primaries to Sen. John McCain (R-Ariz.), his political future seemed in solid shape. He took a job over at Fox News—sort of like a severance package for Republican also-rans. He’d also make several appearances on The Daily Show, to boot, becoming part of the show’s recurring stable of ostensibly good-faith conservatives that got to flummox Jon Stewart. His name was very much in the mix for 2012, but he declined to take a shot at an incumbent President Obama.

But now, after being out of the rigorous spotlight of a presidential campaign for eight years, the way Huckabee’s acting should raise serious questions whether he’s even running in earnest. In other words, it’s the same line of criticism that’s followed Trump around, despite his far-superior poll numbers: Can this guy possibly be serious?

Here’s the simple truth: If Trump deserves to be lambasted as a bad joke—relegated to the Huffington Post’s entertainment section, as the site announced in mid-June—then Huckabee ought to be a rung lower. (I’d be tempted to go with Weird News.) And it’s not just a matter of comparing President Obama to Adolf Hitler. Early in Huckabee’s 2016 run, he gave us all a pretty grim example of his no-apologies mentality, and it was about as gross as you can imagine.

It’s the same line of criticism that’s followed Trump around, despite his far-superior poll numbers: Can this guy possibly be serious?

Back in May, InTouch magazine revealed that Josh Duggar, one of the kids of 19 Kids and Counting fame, had committed multiple molestations as a teenager but had avoided any legal repercussions—with his family failing to report the incidents for more than a year. Shortly after the reports surfaced, Duggar, now 27, took to Facebook and admitted that he’d “acted inexcusably” as a teenager, and his parents ultimately attempted some incredibly bad damage control by way of an interview by Fox News’ Megyn Kelly.

It was also a political blow for Huckabee, however, because no candidate had been quite as intertwined with the Duggar clan as he had. They’d appeared with him at campaign events, as recently as April, in fact. They were basically his highest-profile supporters back in 2008, when they endorsed his candidacy. And he’d been incredibly effusive in his praise for them: Less than two months before the scandal broke, he called them “the kind of folks whose family is the exemplary family that you’d love for every family in America to be like.”

So, put yourself in Mike Huckabee’s shoes  for a moment. Here’s the rundown:

If this happened to you, and you wanted to be viewed as a credible candidate for president, you’d have precisely one option on the table: express regret for your full-throated past support, condemn, distance, and move on. But that isn’t what Huckabee did.

Instead, he authored a Facebook post defending the Duggars, on largely spiritual grounds. He cited the forgiveness that’s core to his Christianity and blasted the Duggars’ critics as having “revealed their own insensitive bloodthirst.” This is one of those rare times when it’s actually a great idea to read the comments, to give you an idea of just how politically toxic and bone-headed this was; it was one person after another condemning Huckabee’s shockingly softball approach.

Maybe the most damaging thing about the Duggar affair is what it suggests about Huckabee—and about what dictates his decision-making. If you’re willing to voice public sympathy and support for someone in the midst of a child molestation scandal, there’s no conceivable way to spin it as a move of political convenience. To the contrary, it can really only mean one thing—that you felt an incredible amount of personal conviction, and that it mattered more than any potential blowback.

That’s a quality people tend to like when it’s rooted in some kind of virtue, but when it’s centered around crude Holocaust references and faith-based defenses of sexual abusers, it loses a lot of its luster. This is to say nothing of the deeply disturbing transphobic joke he cracked last February, imagining himself as a high school teen lying about his gender identity to get into the girls’ locker room. He didn’t apologize for that one, either, instead calling it “a commonsense answer to the insanity.”

Basically, any argument you want to make about Donald Trump being some sort of disgraceful sideshow undeserving of the coverage he’s receiving applies doubly to Huckabee. He’s not running a sustainable, serious campaign—in spite of actually having served as a governor, a past career that implies at least some level of political know-how. And on top of everything else, he’s not even competitive in the polls.

Simply put, when it comes to not giving a sh*t, Mike Huckabee can give any Republican around a run for their money.

Chris Tognotti is a current events and opinion writer based of out Berkeley, California. His Twitter bio claims he’s America’s #3 subversive, but he’s probably closer to #4.