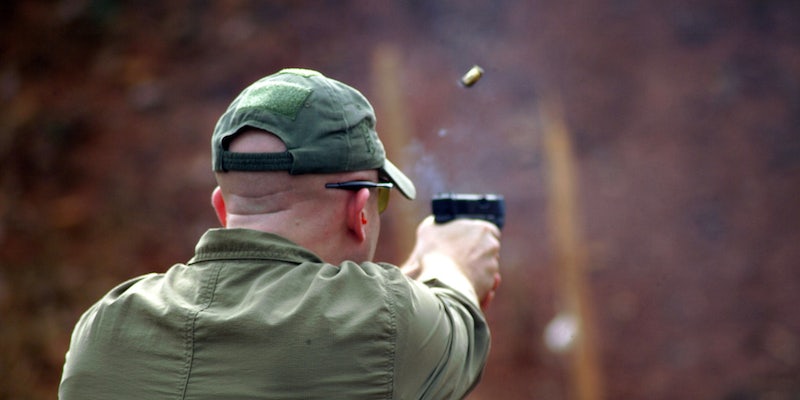 That’s the expression we now know officer Michael Slager shared after he shot and killed Walter Scott, as the Guardian reported earlier this week. In an audio recording, he can apparently be heard chuckling while discussing the “adrenaline rush” he felt, as a senior officer offers some advice on handling the incident’s aftermath.

“They’re gonna tell you you’re gonna be out for a couple of days and we’ll come back and interview you then,” the senior officer tells Slager, apparently knowing full well how this all tends to go down. “They’re not going to ask you any kind of questions right now. They’ll take your weapon and we’ll go from there. That’s pretty much it.”

The senior officer continued: “The last one we had, they waited a couple of days to interview officially, like, sit down and tell what happened. By the time you get home, it would probably be a good idea to kind of jot down your thoughts on what happened. You know, once the adrenaline quits pumping.”

Laughing nervously after a poorly timed, off-color wisecrack is one thing. Laughing after fatally shooting an unarmed man multiple times is quite another.

The laughter could very well be that kind of nervous expression one makes after knowing full well that they’re treading in deep waters; an unnerving state from which any momentary escape offers some semblance of relief. Laughing nervously after a poorly timed, off-color wisecrack is one thing. Laughing after fatally shooting an unarmed man multiple times is quite another.

Still, the gravity of the situation ultimately gave way to that strong pump of adrenaline Slager said he felt afterwards. Adrenaline rushes are those chemical releases that often take hold during and after rollercoaster rides, bungee jumps, street-corner fistfights or a number of stressful situations, prompting heightened emotions. That’s probably why the senior officer advised Slager to wait a while until noting down what happened between him and Scott.

Based on what’s now known about the circumstances leading to Scott’s shooting death, Slager wasn’t speaking with a senior officer after escaping a life or death battle involving two armed individuals. Slager’s life was in no immediate danger, yet he fired his gun and killed a defenseless man. It was, for Slager, apparently a dose of high-impact action.

But it wasn’t so stressful that it made him express, based on the recording, any semblance of worry, concern, or remorse that he had to kill someone on the job. He laughed. And that’s part of what makes this particular incident—aside from the graphic video that’s been replayed ad nauseum on the Internet—especially harrowing.

Instead, Slager’s emotional response after shooting Scott felt as though he’d just successfully hit his target during a hunting trip, as if he’d shot a deer or another wild animal rather than a fellow human being. From a police officer, that’s scary, because these officials operate under the mission of serving and protecting the communities in which they work. It’s supposed to be a noble, civic duty, a profession many young children are taught to view with the utmost respect, admiration, and trust.

Slager’s emotional response after shooting Scott felt as though he’d just successfully hit his target during a hunting trip, as if he’d shot a deer or another wild animal rather than a fellow human being.

But when an officer laughs after shooting an unarmed, black male citizen during a stop, as Slager did, it only reinforces the generational suspicion many black people feel toward the police. Sadly, the laughter sends the dehumanizing message that black lives are not worth protecting; instead, black people are there to be hunted.

Unfortunately, that’s what black people have come to expect from police officers—that they’ll be targeted or harassed, instead of being granted the same graces afforded by their white peers. When a police vehicle looms in the rear view mirror during an ordinary drive, the sight itself isn’t a reminder that a benevolent protector is always looming over your shoulder, there to catch you if you fall. Instead, it induces trepidation, an inkling that they’ll find any reason to turn on the lights and begin probing. It feels like there’s an invisible target on a black individual’s back.

That fear doesn’t magically go away when those who deny this trend of police violence against unarmed black people assert that officers like Slager are just a “few bad apples.” Because even after video of Scott’s shooting death was released, campaigns emerged on GoFundMe and Indiegogo to support Slager. These efforts don’t signal interest in offering support for a fair trial, instead functioning as an endorsement of anti-black police violence.

It feels like there’s an invisible target on a black individual’s back.

As Rep. Hank Johnson (D-Ga.) said during a Tuesday session of Congress, where he blasted his colleagues for not substantively addressing issues of police brutality: “It feels like open season on black men in America, and I’m outraged. In fact, all Americans are at risk when bad actors in law enforcement use their guns instead of their heads.”

It’s hard enough to feel safe as a black person when police officers go for the kill during stops, rather than perform their duties in a way that respects black lives and the ability to move through the justice system as necessary. It’s even harder when a man like Slager laughs after the fact.

When it comes to unarmed black people being beat and killed by police, there’s nothing remotely funny. But Slager’s laugh doesn’t exist in isolation. When staunch supporters of police officers mock and scorn black people who speak out against these senseless deaths, they’re belittling several years of pain and grief associated with how racism has intersected with policing. Black pain and black death doesn’t exist as fodder for trolling or as some kind of sordid form of entertainment.

That pain is undeniably real. And it’s no laughing matter.

Photo via ManOnPHI/Flickr (CC BY 2.0)