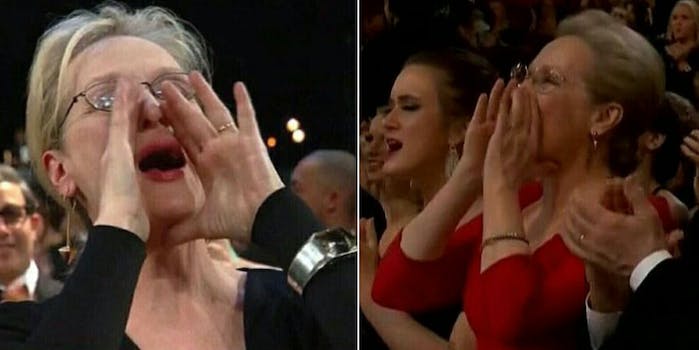 Meryl Streep updated her own meme at the 2018 Oscars

Only Meryl Streep can update her own meme.

Meryl Streep didn’t take home another Oscar on Sunday night, but she did inspire a new meme. Well, it’s actually an updated version of an old meme.

Last year, fans turned a screenshot of Streep expressing her admiration for Debbie Reynolds during the 2015 Screen Actors Guild (SAG) awards ceremony into a meme of themselves finishing song lyrics.

The Killers: It started out with a kiss, how did it end up like this?

Streep graced the internet Sunday night with an updated photo of her to use for the classic Shouting Meryl Streep meme. Fans took notice and didn’t miss an opportunity to re-meme the 68-year-old actress.

meryl streep is about that life #oscars pic.twitter.com/Xq6m32eAlJ

Is it just a woo? Something more? pic.twitter.com/MgcxeZbtPd

In other news, folks on Twitter also thought Streep looked an awful lot like the fairy godmother from Shrek 2.

Why did Meryl Streep attended the ceremony dressed as the Fairy godmother from Shrek? #Oscars pic.twitter.com/HQZIQ6jpVX

These spot the difference games are getting harder. Meryl Streep or Fairy Godmother? pic.twitter.com/uyf0Qpytkb

omg @Lindseykupfer pointed out that Meryl Streep looks like the Fairy Godmother from "Shrek 2" tonight and I may never recover pic.twitter.com/4Muw5Hta1C

Streep was nominated for best actress for her role as Washington Post publisher Katherine Graham in The Post. She’s the most nominated actor in the history of the Academy Awards with 21 nominations and three wins. And she knows how to update her own meme, which deserves a separate award.