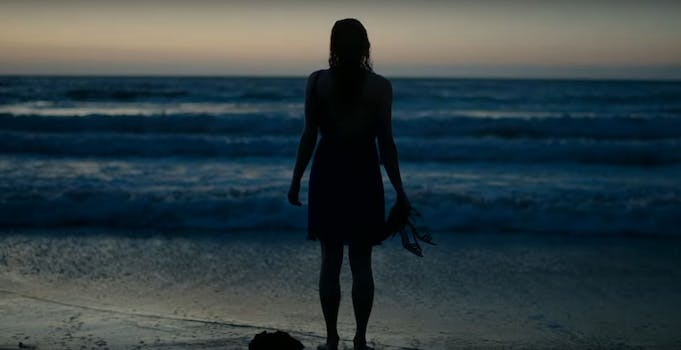 The fundamental hypothesis of Big Little Lies is that human nature is fraught with contradiction. Madeline Martha Mackenzie (Reese Witherspoon) is a career tiger mom who wants what’s best for her family, even if it’s driving all of them away from her. She loves her dutiful husband (Adam Scott) but longs for more than he can give her, even if she’s not willing to admit it to herself. Maybe Madeline pines for her ex (James Tupper) who has remarried a much younger, hipper woman (Zoë Kravitz). Maybe it’s the community theater director (Santiago Cabrera) she’s pushing to produce Avenue Q, which proves surprisingly controversial in the insular town of Monterey, California.

In David E. Kelley’s HBO miniseries, which premiered Sunday night, Madeline’s pent-up unhappiness spills into everything around her.

She befriends a young, single mother, Jane (Shailene Woodley), who is new to the coastal enclave—once a haven for writers like John Steinbeck—that is now controlled by gluten-obsessed PTA moms. When Jane’s son Ziggy (Iain Armitage) allegedly bites another first-grader at their school, Madeline pushes her to stand her ground and affirm the boy’s innocence. This ignites a war with the victim’s mother, Renata (Laura Dern).

A one-woman steamroller with an iPhone and a latte in hand, Madeline is so busy drawing battle lines in the sand with everyone she meets that it blinds her to the real problems of those around her. As a recent episode of Girls—another HBO program about flawed women—astutely pointed out, it’s difficult to have observations about other people when you’re only thinking about yourself. Her best friend, Celeste (Nicole Kidman), is an accomplished attorney who has given up her practice to be a stay-at-home mom for her hottie husband, Perry (Alexander Skarsgard). The two have wild, passionate sex. He also routinely abuses her, forcefully grabbing her arm whenever she threatens to pull away from him. Perry is terrified of losing Celeste, and her arms are covered with proof of his fear.

Big Little Lies is dense, richly layered, and ambitious, giving its actors the kinds of weighty, nuanced roles too rarely afforded actresses, especially women over 30. Witherspoon, who excels at playing type-A control freaks, gives her best performance since 1999’s Election, playing a character who is a spiritual successor to that film’s Tracy Flick. If Tracy so obsessed over becoming her school president that the pressure drove her to madness, Madeline just wants to be the perfect mom. The show is reminiscent of the well-worn cliché that many of the mothers who sacrificed their careers and lives for their children channel that thwarted ambition into bake sales and parent-teacher conferences.

Every member of the show’s main cast is firing on all cylinders. Dern, so great in the under-loved Enlightened, gets another chance to play a woman struggling with constructive ways to channel her rage—and she’s excellent. A self-described “bulldog,” Renata is a board member at PayPal, someone used to having to prove her ability to rooms full of men who secretly don’t believe she deserves to be there. After her daughter is bitten, her aloof husband Gordon (Jeffrey Nordling) attempts to calm her. Renata protests. She responds that after a day of never letting her guard down, Renata just wants to be a scared mom.

Although Big Little Lies is essentially a prestige soap opera—Desperate Housewives with a better soundtrack—its best scenes are small and observational. Later in the show, Renata discusses a passionate tryst in Gordon’s office, and she comments that it was nice to feel desired for a change. He responds that her remark is ridiculous; he wants sex all the time. But there’s a key difference, as Renata explains, between merely wanting to get off and feeling as though your partner is truly connecting with you. Jane, a sexual assault survivor, discusses frankly with Madeline, who is shy about broaching the subject of sex around her, what it’s like to become attracted to men again after her rape.

The issues and concerns of women, particularly mothers, are so rarely explored in pop culture that these moments are quietly revelatory.

For a show filled with as much trenchant insight as this one, you may find yourself asking why you don’t like it more. That’s because Big Little Lies, for its many strengths, is fundamentally at odds with the medium in which it is told. Adapted from Liane Moriarty’s book of the same name, the show would have made a terrific two-hour movie—pulpy, addictive, and compelling. But as a miniseries, the narrative has been stretched beyond its capacity, filled with redundant scenes that exist simply to pad its runtime. It’s the rare show that is too much of a good thing, at least when clumsy storytelling doesn’t get in the way.

Framing devices are almost never necessary, and they have never been less necessary than in Big Little Lies. At the beginning of the show, viewers are told that someone has been murdered, and the local townsfolk are called in for questioning. These witnesses act as the show’s Greek chorus, testifying to stray comments and hearsay that may provide clues as to who killed the mystery victim. What’s strange is that many of these people, who seem to have no lives outside of gossiping about the lead characters, comment upon events and conversations during which they were not present. Instead of nosy bystanders, the residents of Monterey appear to be all-knowing and all-seeing, like the omnipotent star child at the end of 2001: A Space Odyssey.

Because the producers need to milk seven episodes out of a relatively simple plot, Big Little Lies takes a while to get where it’s going. Characters spend countless hours running alongside the vast emptiness of the Pacific Ocean, or experiencing the same flashback viewers have already seen twice before. For instance, a pivotal plot point hangs on a child’s birthday party, and the show spends three episodes building up to the momentous occasion. Critics may refer to the pacing as “deliberate” or “methodical.” I call it an unfortunate but necessary evil, one that keeps a mostly fine show from being truly stellar.

Because Big Little Lies is filled with major movie stars and directed by an up-and-coming auteur (Wild’s Jean-Marc Valleé), it’s hard not to judge the show against the much better movie it would have been. There’s only one reason the literary adaptation isn’t playing in 3,000 theaters instead of on cable: Big Little Lies is the kind of mid-budget drama that Hollywood—in its monomaniacal intent on producing as many superhero movies as possible—stopped making ages ago. The show recalls the great An Unmarried Woman as well as inter-generational dramas like Boys on the Side and Fried Green Tomatoes, in which adult women were treated as humans, not just Spider-Man’s aunt.

Big Little Lies is a reminder that it’s incredibly difficult to be a mom. It’s a thankless job in which you’re constantly terrified that your kids, as they grow up and become their own autonomous human beings, might not need you. You are judged by fellow mothers for almost everything you do. The show is empathetic about these struggles, refusing to fault its characters for their flaws in a way that’s extremely refreshing. But at the end of the six advance episodes provided to critics, I couldn’t help but wish it didn’t have to exist.