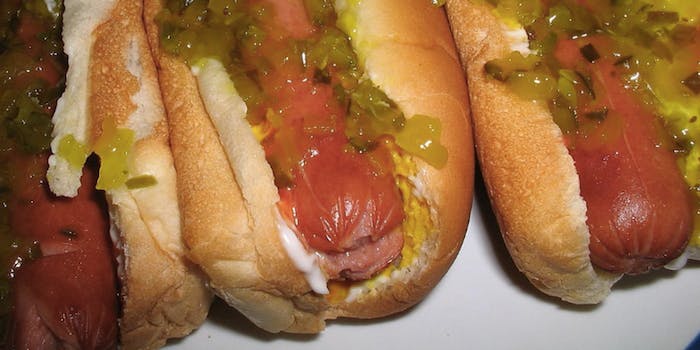 Is a hot dog a sandwich? The great American debate resurfaces

Your BBQ just got controversial. Again.

For as long as the sandwich, hot dog, and America have existed, humanity has been plagued by one burning question. Can the  the hot dog be considered a sandwich? Are they interchangeable? Or is the mere suggestion of sameness an All-American sin? Never has the conundrum been resolved.

Is a hot dog a sandwich?

The debate is as much about etymology as it is principle. Last year, Merriam-Webster ignited a civil war by declaring the hot dog a sandwich.

Have a great #MemorialDayWeekend. The hot dog is a sandwich. https://t.co/KeNiTAxPAm

This act of perceived aggression did not go unnoticed.

you’re a monster. Don’t disrespect the hot dogs like that.

Year after year, the internet returns to this debate with the same divisiveness and obstinance that Americans tend to display with every seemingly small argument.

Yankees, if y'all think…

Do yall also consider this a BBQ Sandwich? pic.twitter.com/Ej5YjgOfTZ

Just like most highly politicized issues in Trump’s America, today’s most renowned hot dog authorities are dismissed for their expertise. Eric Mittenhal, whose Twitter bio lists his prestigious position as the Vice President of Public Affairs at the North American Meat Institute, confirmed that a hot dog is not, in fact, a sandwich.

Hotdog.org, the assumed authority on cylindrical processed meats, maintains that a hot dog is officially a separate entity from a sandwich. According to their manifesto,”limiting the hot dogs’ significance by saying it’s ‘just a sandwich’ is like calling the Dalai Lama ‘just a guy.'”

There might be more to this than a simple internet beef. In 2014, Guardian columnist Jeb Lund presented debate as a perfect example of American “exceptionalism.” Historically, both the sandwich and the sausage come from other places. Yet Americans have taken both, modified them slightly, and declared them our own.

We feel a distinct possessiveness over both, laying passionate claims that one simply cannot be the same as the other. Or that maybe, from a distance, they’re exactly the same. You’re either on our side, or you’re on the other.

Is all this strife really necessary? On Independence Day, of all occasions? Must this country tear itself apart once again?

The answer, from sea to shining sea, is always yes.