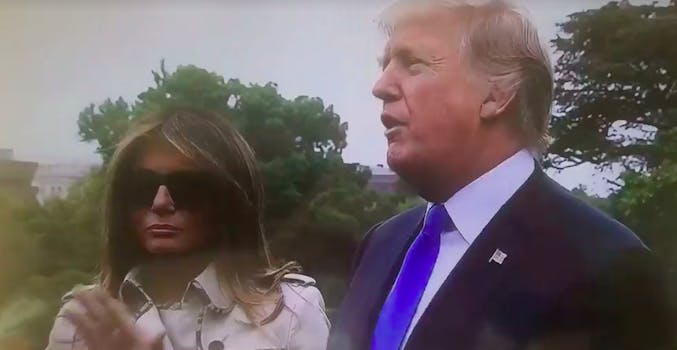 It's understandable Melania Trump might not want to to be around her husband, but how far is she willing to go?

It’s easy to believe that Melania Trump might not want to spend a lot of time with her husband. Donald Trump hasn’t exactly shown himself to be women’s greatest ally, and videos of the first lady swatting away the president’s hand are all over YouTube.

But would she go so far as to use a body double to avoid being at this side? Well, some conspiracy theorists seem to think so. They point to a CNN video shot on Friday that they claim shows Donald Trump standing on the White House lawn with an imposter.

The theory seems to have started when actress Andrea Wagner Burton (who seems to appear mainly in infomercials) posted on Facebook that she found the video… suspicious.

Will the real Melania please stand up? Is it me or during his speech today a decoy “stood in” for Melania??…

Not only is the first lady dressed like a cartoon version of an undercover spy, but at around the three-minute mark in the video Trump, for some odd reason, says, “My wife Melina, who happens to be right here,”.

According to an Inquistr article, searches for “Melania Trump double” have risen 250% on Google since Friday. Of course, it’s important to remember that since practically no one was searching for that phrase before, it wouldn’t take very many people to create such a spike.

Still, the Melania double conspiracy is a reality. Wagoner Burton’s post has been shared over 100,000 times and other people are now jumping on the “fake Melania” bandwagon.

I’m not one for conspiracies but that’s not Malania…..

Oddly enough, this isn’t the first time someone has suggested Melania might be using a body double. Over a month ago a Twitter user suggested the first lady might have pulled a Queen Amidala and switched places with one of her security personnel.

As fun as it might have been to believe, it’s probably safe to say that this myth is busted. If Melania ever starts kissing her husband in public, we’ll take a closer look.