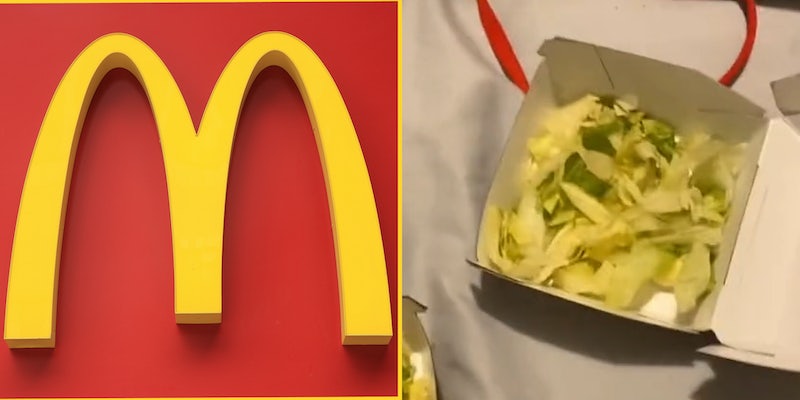 ‘Them McDonald’s employees is on one’: TikToker orders 3 McChickens—then receives 3 boxes of shredded lettuce

'@Mcdonald's why do you guys hate me'

One TikTok creator says she ordered three McChickens from UberEats and received three chicken nugget boxes with lettuce inside.

In the video, which already has over 300,000 views, she shows the three boxes that say “Chicken McNuggets” on them.

“I ordered McDonald’s with UberEats, right?” @shan.hilton says in the video. “And I ordered three McChickens.” She then shows the three boxes she received, all of which are labeled as having chicken nuggets.

She then opens the boxes to reveal they are just filled with shredded lettuce.

“@Mcdonald’s why do you guys hate me” she captioned the video.

The comment section was full of people equally in disbelief by the order she received.

“I don’t think you was the only one who was high. Them McDonald’s employees is on one,” one person wrote.

“You got the Easter special. You got to search for them nuggets,” another person joked.

Others shared similar stories that happened to them.

“I ordered a happy meal once and they gave me cookies in the chicken nuggets box,” one person added in the comments.

“They put an egg in my son’s happy meal instead of chicken nuggets,” someone else wrote.

In a follow-up video @shan.hilton showed a screen recording of her initial order. Three McChickens among other items shown on the receipt.