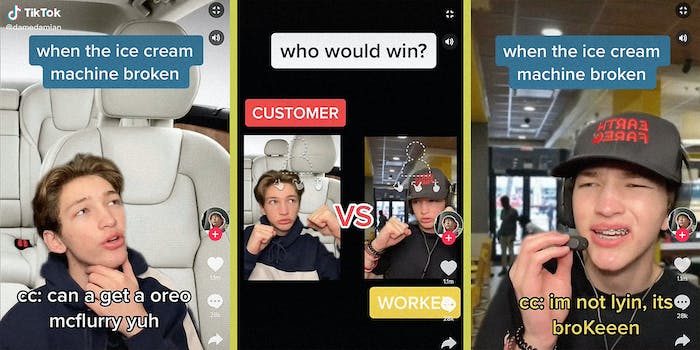 The mystery of the McDonald's ice cream machine.

Why are the ice cream machines at McDonald’s always broken? People have gotten close to figuring it out, but this claim has become an enduring meme over the last few years. And now it’s spread to TikTok.

Back in late March, TikToker damedamian created a song that illustrates the mental and emotional struggle of the broken McDonald’s ice cream machine. The audio has been used in more than 34,000 TikToks since then, and his video received more than 7 million views.

While the song playfully suggests this perpetual problem will lead to a fight between customer and worker, which is not something underpaid fast food employees should actually have to deal with, people put their own spin on it.

Back in January, a McDonald’s employee documented the cleaning process of an ice cream machine on TikTok and grossed out viewers, though that process is often cited as the reason McDonald’s employees say the machines are down. Last month, YouTuber Johnny Harris did a deep dive into the phenomenon, and he came to the conclusion that the company that makes the machines, Taylor, might be incentivizing broken machines—it reportedly draws a quarter of its revenue from maintenance visits.

While it makes sense that this phenomenon is really just about money, its spread on TikTok has produced some great comedy—and there’s now more documentation of its ubiquity. TikToker q.deonte claims the McDonald’s ice cream machine was even broken in Abu Dhabi.