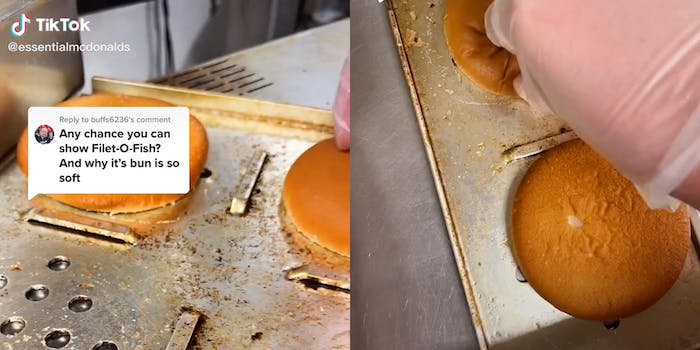 ‘Doing us wrong with the half a cheese’: McDonald’s worker shows how the Filet-O-Fish is made in viral TikTok, sparking debate

'I wish more buns were steamed!!'

A viral TikTok shows how McDonald’s Filet-O-Fish sandwiches are made—and how employees make the buns so soft.

The video was posted by TikTok user @essentialmcdonalds, an account with more than 393,000 followers that posts “anything you want to know from McDonald’s.”

The Filet-O-Fish footage came in response to a viewer’s comment on a previous TikTok asking, “Any chance you can show Filet-O-Fish? And why it’s bun is so soft.” The video garnered about 6.7 million views on TikTok as of Tuesday.

The footage shows a McDonald’s worker putting a Filet-O-Fish bun into a steamer, which he explained is why the bun is so soft. Each bun gets steamed for 11 seconds, he said. The Filet-O-Fish is the only sandwich that comes with steamed buns, which is likely why they feel different.

Then the worker showed how the Filet-O-Fish sandwich is assembled, pointing out that each sandwich only gets half a slice of cheese.

“I don’t know why they don’t do the full slice, but a half is how it’s supposed to be made,” the worker said.

TikTok viewers had divided opinions on both the half-slice of cheese and the Filet-O-Fish in general.

“Actually i think the half piece of cheese is right. I want to taste the fish, not the cheese,” one viewer commented on the video.

Another viewer disagreed, saying, “Doing us wrong with the half a cheese @mcdonalds.”

Cheese aside, one viewer couldn’t believe that customers actually order the Filet-O-Fish.

“People actually order that…” they commented.

Someone else commented, “why does everyone hate on the fish fillet. bro I feel like I’m the only one that fw it.”

One viewer thanked @essentialmcdonalds for the video, adding, “I wish more buns were steamed!!”

According to the TikToker’s response, customers can always ask for the bun on any sandwich to be steamed.

TikTok user @essentialmcdonalds did not immediately respond to the Daily Dot’s request for comment via TikTok comment. The Daily Dot also reached out to McDonald’s.