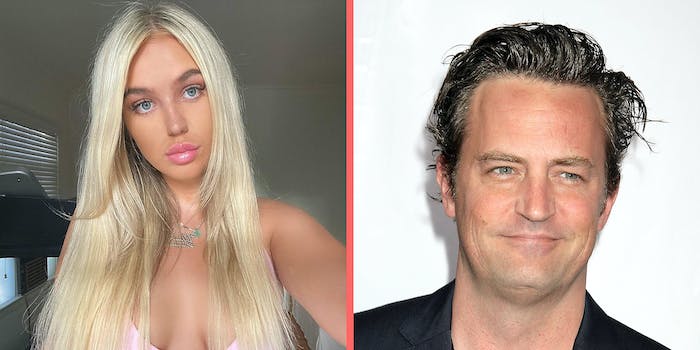 After she exposed Matthew Perry on TikTok for matching with her, Kate Haralson says she’s getting blamed for ending his engagement

Matthew Perry and his 29-year-old fiancée have officially called it quits — and it seems that some are placing the blame on a TikToker who leaked a private call she had with the Friends actor last year.

Kate Haralson made headlines in May when she posted a video of a FaceTime call she had with Perry after they matched on Raya, an exclusive dating app often used by celebrities and other public figures, in May 2020. In the footage, the two merely played a game of 20 questions, with Perry appearing flirtatious at times.

Although nothing overtly sexual took place during the conversation, 51-year-old Perry was criticized for matching with Haralson, who says she was clear about being 19 at the time of their conversation. Conversely, others slammed Haralson, claiming she was merely capitalizing on the actor’s fame and seeking to gain attention by posting the video publicly.

But now, Haralson says some people are going so far as to blame her for Perry’s split with Molly Hurwitz.

“everyone blames me lol,” she said on social media, per Deumoix. “They were on a break.”

Although Perry and Hurwitz began dating in 2018 and got engaged in November 2020, Haralson says the two were “on a break” when she and Perry had their FaceTime interaction in May of last year.

Perry’s official statement on the end of his relationship is simply that “Sometimes things just don’t work out and this is one of them.”

He also made headlines following last month’s long-anticipated Friends cast reunion, where his appearance and seemingly slurred speech caused concern among fans. But sources close to the actor, who has been open about his past struggles with drugs and alcohol, attributed the affectation to “an emergency tooth procedure” he’d had the same day.

Perry had previously spoken very highly of his then-fiancée, who he once called “the greatest woman on the face of the planet at this time.”