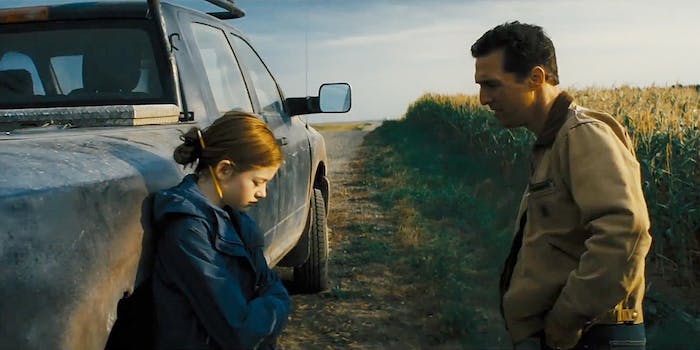 Too many conversations destined for doom begin with sentences like this: “We were all fine with it back in the good old days!” Matthew McConaughey has found himself bathed in unwelcome limelight after expressing something similar: his desire for the Redskins‘ mascot (which has come under fire for its racist implications) to remain unchanged. In an interview with GQ, the actor said:

What interests me is how quickly it got pushed into the social consciousness. We were all fine with it since the 1930s, and all of a sudden we go, ‘No, gotta change it?’ It seems like when the first levee breaks, everybody gets on board. I know a lot of Native Americans don’t have a problem with it, but they’re not going to say, ‘No, we really want the name.’ That’s not how they’re going to use their pulpit.

These comments come after much commentary—online and offline—about the 81-year-old mascot, an image that has prompted articles and T-shirts alike as part of the discussion around changing the name. Native American activists and journalists have stepped forward to express their disapproval of the mascot. As writer and citizen of the Oglala Lakota Nation Simon Moya-Smith, in his article on CNN, argued, “When the status of a Native American is demoted to that of a caricature, we are objectified and diminished as a people. We become entertainment, not fellow citizens. How are you supposed to take me seriously if all you see is the stereotypical image of the Hollywood or sports mascot Indian?”

But McConaughey, like many white Americans who have the luxury of not finding their culture and identity stereotyped and dehumanized for entertainment, shrugs off this perspective. Of the mascot, he says: “I love the emblem. I dig it. It gives me a little fire and some oomph.” The enjoyment of the Redskins mascot at the expense of those who it causes pain is acceptable, McConaughey’s logic goes, because “we were all fine with it since the 1930s.” But the “we” he refers to here is very specific, and so is the attitude behind that “we.”

The oppressed didn’t always have a platform, as we know. Before the Civil Rights Movement, it was easy for white Americans to ignore the issues facing people of color: Jim Crow laws, media whitewashing, and segregation easily enforced “out of sight, out of mind,” enabling whites to live their lives insulated from non-whites—insulation that unfortunately persists today. Media played a role in the turning point for demanding attention to the problems of racism and oppression in the United States, particularly with the widespread coverage of events such as the famous desegregation of Little Rock High School and marches led by Martin Luther King, Jr.

But even with mass media’s eye on the movement, the messages crafted around and about the Civil Rights Movement weren’t always accurate representations of the sentiment and goals of people of color: Indeed, media has often played a role in reproducing and perpetuating racism. Aside from movement leaders, individual voices and perspectives that made up the masses of Civil Rights activists were unheard, unknown, and unsought.

A lot has changed since the Civil Rights Movement of the ‘50s and ‘60s, so it’s certainly changed since the ‘30s, the time McConaughey looks back on fondly as an era when the beloved mascot of the team he’s rooted for since he was a young lad growing up in Texas was appreciated for the “fire and oomph” it brought the fans.

Here in 2014, the voices of the oppressed don’t rely solely on the media or party leaders to tell their stories. There are, of course, media outlets that have chosen to amplify the perspectives of Native American activists; a segment on The Daily Show with Jon Stewart, for example, in which Stewart puts Redskins fans and Native American activists together in the same room, forcing the (white) fans to face the very people who they claim not to be offending.

But with the explosion of social media, oppressed groups have taken to Twitter and other platforms to mobilize their messages, relying on digital virality and word of mouth to spread the word rather than hope their message is picked up and framed correctly by media outlets who often lack a personal stake—or personal education—on the subjects being discussed.

Censorship, too, is an obstacle faced by activists whose messages aren’t always palatable to white audiences. Jacqueline Keeler, one of the activists behind the massively popular hashtag #NotYourMascot, for example, faced censorship of her message when she and her group appeared on an Oklahoma radio show. Her intent was to read the Declaration of Independence out loud on the program, highlighting the place in the Declaration where the Founding Fathers referred to Native Americans as “merciless Indian savages.” During airing, however, those words were edited out by the program after being deemed too offensive.

“It made me wonder why the NFL does not simply edit out other offensive words like Redskins,” Keeler said, adding that if words in the very Declaration of Independence is deemed too offensive to play on air, surely a slur like “redskins” must be deemed inappropriate.

There’s generally no “editing out” on Twitter, however, and that’s where the movement has seen much of its success, with #NotYourMascot gaining enough support to end up trending during the Super Bowl, being used almost 18,000 times in one day. Whereas it is the nature of traditional movements to swallow up the individuals that make up its ranks with solidarity in mind, social media manages to enable a mass movement while also preserving the individual voices of its activists.

McConaughey makes a passing reference to the “many Native Americans” that he knows “don’t have a problem” with the racist implications of the Redskins mascot—a statement that smacks of tokenism, which Redskins owner Dan Snyder is clearly familiar with—but it’s hard to argue that there aren’t just as many (if not more) indigenous Americans that do have a problem with it. Their tweets don’t lie: they have voices and speak for themselves. In the 1930s, no one would even have had a concept for Twitter; it was as far away as the moon. In October of 2013, Twitter reported more than 500 million tweets per day, and studies predict that by 2015 U.S. media consumption will rise to 15.5 hours per day. That’s a lot of voices.

Yet McConaughey wonders about how “how quickly it got pushed into the social consciousness” that Rediskins was a slur. With media consumption at an all-time high in the U.S., and with conversations around racial and social justice demanding more space and attention than ever before on these channels, it’s no surprise at all that messages of change have found their way into the viral veins of the Internet. Trending topics on platforms like Facebook and Twitter beg to be clicked due to rising cases of FOMO, even users who may not consider social justice their “thing” can be exposed to the plight of Native Americans that their insulation might not have previously enabled.

All else aside, the “quickness” McConaughey refers to in his interview with GQ is most telling. Change always seems too fast for those bent on preserving a past that has made life comfortable for, particularly, the white, male, and wealthy. But in truth, finding a resolution to the battle over the racist Redskins mascot has been anything but quick. Protests and complaints against the racist name have been stewing since 1972, with some historians claiming an even longer timeline. This article in the Chicago Tribune is dated Jan. 24, 1988 and, sadly, makes many of the same arguments that Native American activists continue to make today, met with the same racist, damaging logic about the name “redskin” being an honor, with Dan Snyder demanding that offended Native Americans “respect” his opinion.

McConaughey’s blindness isn’t unique. It’s a symptom of a culture, after all, that encourages blindness when it comes to America’s history of violence and genocide. For those of us whose histories haven’t been mocked and stereotyped with slurs like “redskin” and other epithets, this battle over the Washington team’s name might seem sudden. But for those who have been fighting for their culture and their humanity since white people set foot on this continent, it’s been a long time coming.