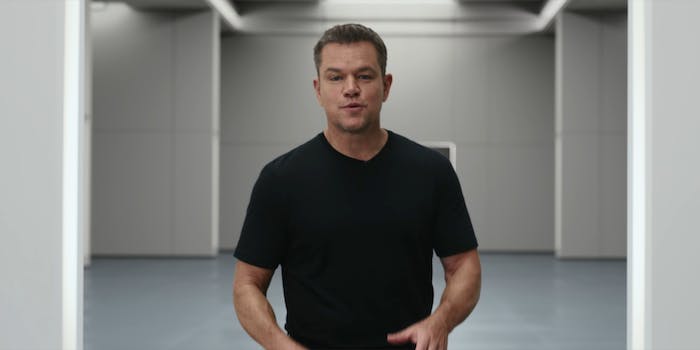 Damon’s Crypto.com ad consists of an ambiguous one-minute monologue about heroism, culminating in the catchphrase “Fortune favors the brave.” Without actually explaining what cryptocurrency is, the ad compares it to impressive feats like climbing a mountain or traveling to space. It obviously doesn’t mention that cryptocurrencies are notoriously unstable, described by many as a scam. As the New York Times pointed out, the ad just riffs on this idea by positioning Crypto.com investments as dangerous and exciting, aimed at a target audience of young men.

Other celebrities like Kim Kardashian have been called out for advertising cryptocurrencies and NFTs, but Damon became the poster boy because he appeared on-screen in this memorably corny commercial.

As crypto investors continue to report massive losses—with some losing their life savings—Damon is facing a combination of mockery and serious criticism on social media. People are jokingly comparing his crypto endorsement to his role as a thief in Ocean’s Eleven, and deriding the Crypto.com ad’s absurd macho subtext—while highlighting how much money people may have lost if they followed Damon’s advice to use Crypto.com

While plenty of celebs attach themselves to problematic brands, cryptocurrency is uniquely controversial. Damon wasn’t selling a product in that Crypto.com commercial. He, a multimillionaire, was encouraging regular people to invest money in a manner that could lead to financial ruin.

There’s a widespread sense of anger at celebs who used their platform like this, because not only was Damon earning money from his role as Crypto.com’s brand ambassador—he also wasn’t taking the risks he personally characterized as brave and cool. In a hypothetical scenario where an A-list star like Damon actually did lose their fortune on crypto (which he hasn’t), he could easily earn it back thanks to his thriving career. The same can’t be said for everyday investors.

The Daily Dot has reached out to Matt Damon’s representatives for comment.