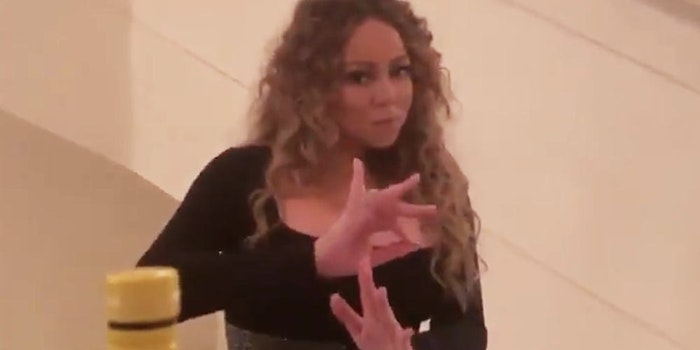 This is how you win an internet challenge.

Ever since the bottle cap challenge went viral earlier this month, celebrities have been posting their attempts on social media—to varying degrees of success. But it seems safe to say that no one will top Mariah Carey, who shared her own effort on Sunday.

Wearing a skin-tight black dress with a glittering corset, the Grammy-winning singer pretended to do some martial arts moves in front of what appears to be an empty bottle of white wine.

“Challenge accepted!” she wrote with the hashtag #bottletopchallenge, which isn’t even the correct hashtag but we’ll give it to her anyway due to what happened next.

Obviously, the point of the challenge is to execute a perfect roundhouse kick, just connecting with the bottle cap in a way that causes the lid to go spinning off but otherwise leaves the bottle intact and standing upright. But since Ms. Carey isn’t exactly known for her athletic prowess, she performed the challenge in a way only Mariah Carey could.

Putting her finger to her ear, Carey then proceeded to hit her signature high note, which seemingly caused the bottle to tremble and the screw-top cap to go flying off.

To anyone wondering what in the heck kind of sorcery this is, you’re not alone. Many responded to Carey with jokes and memes to express their astonishment at what they had just witnessed.

WHAT ON EARTH JUST HAPPENED pic.twitter.com/SN5Ba3a8kT

watched this like 100 times and still don’t understand how you did this pic.twitter.com/gCun1k6AjU

Others declared Carey the clear cut winner of the bottle cap challenge:

THIS IS THE MOST ICONIC SHIT EVER

Some argued that Carey may have had some off-camera assistance, given that the near impossibility of the feat. Even breaking a wine glass using an unamplified high pitch is extremely difficult, and has only been achieved once on Mythbusters, according to Science Focus magazine.

But if Carey, no stranger to memes and poking fun at herself, wanted to get the internet talking, then clearly her mission was accomplished.