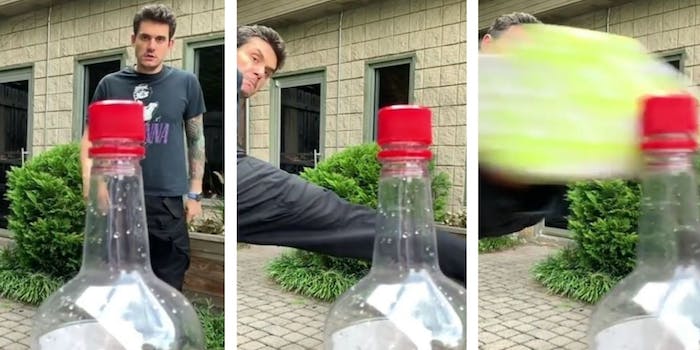 This will kick your rear in gear.

Jason Statham is standing on a roof somewhere with tall buildings behind him. The action movie star is in a fighting stance, and he’s staring down a glass bottle that’s been delicately set inches away from the camera filming him. In slow motion, Statham turns in a circle and aggressively lifts his right leg. His foot grazes the bottle, and the cap that was sitting on top flies out of view. The bottle remains upright and basically untouched.

Then, Statham completes his rotation and gives the beginnings of a smug, knowing smile. He’s just completed the bottle cap challenge, and he’s recorded it all for Instagram. He posted the video on Monday. By Tuesday afternoon, it had accumulated more than 12 million views.

#bottlecapchallenge #challengeaccepted @erlsn.acr This thing landed on my head from @johnmayer but will quickly go to a couple of fellas we’ve seen do push ups badly. All yours @guyritchie and @jmoontasri

What is the bottle cap challenge?

All you need is a bottle with a cap that can be twisted off on top. The point is for you to roundhouse kick the bottle but to only graze it so the cap twists off and flies away with the bottle remains untouched and unbroken.

Unlike previous viral internet challenges—like the shell on challenge, the microwave challenge, or the 10-year challenge, for instance—you actually need some martial arts talent to pull this off successfully. Otherwise, you might end up with a broken bottle and perhaps an injured foot.

How did the bottle cap challenge start?

According to Know Your Meme, Farabi Davletchin, a Taekwondo instructor and a former world champion, uploaded to Instagram a video of himself kicking the caps off bottles in two different ways. He was silent in the video—which was uploaded on June 25 and now has more than 250,000 views—but in the description, he wrote, “New Challenge with #farakickschallenge 😉! Sending a challenge @jasonstatham @thenotoriousmma @jcvd @jackiechan . Waiting for you video friends.”

It didn’t take long for the challenge to catch on with other martial arts experts. Max Holloway, a UFC star, completed the challenge last Friday, though the cap stayed on the bottle while spinning quickly like a bruised dreidel.

That Twitter post has more than 30,000 likes and nearly 2.5 million views. Soon enough, the challenge would enter the mainstream.

There are plenty of celebrities who are now taking part. Statham, for example. Holloway called out pop star John Mayer to take part, and the singer-songwriter did exactly what was asked.

As did Ellie Goulding.

Then, it was UFC star Conor McGregor’s turn to attempt it while holding a bottle of whiskey in his hands.

Excellent job Jason Statham, I tip my cap to you.
I’ll take it from here.
I nominate Floyd Mayweather. @properwhiskey pic.twitter.com/9IrFUXyehx

But celebrities and MMA stars aren’t the only ones who are giving the bottle cap challenge their best shot. Like Holloway’s 6-year-old son.

Or others who aren’t exactly experts at the art of kicking.

@blessedmma @johnmayer #bottlecapchallenge #challengeaccepted … stay active my friends.. even if you wind up on the floor. And yes, the orange was cut in half but the stale sub was barely cleaved … #carpediem #yolo

Others didn’t exactly play by the rules.

Really, the bottle cap challenge is fun for the whole family, minus of course all the cleanup from the spills you’re sure to cause as you attempt the challenge. Throughout my bar touring history, I’ve seen people open the bottles with their teeth, with the help of a counter, and now with their feet. But if you want a foolproof plan to get to the liquid inside the bottle, your hands are probably still the best way to go. Even if that way isn’t quite as entertaining.