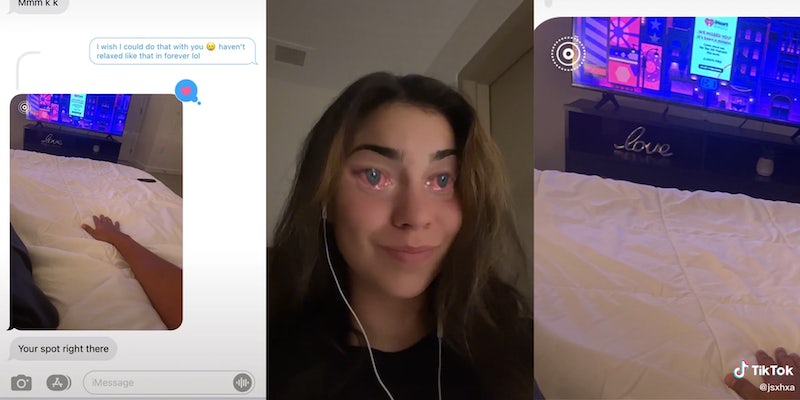 ‘You can’t tell me this is a man’s room’: Man texts pic of his place to woman he’s dating—and reveals a major red flag

'That room gives me female vibes all the way.'

Can you tell if a guy has a secret girlfriend just from looking at a photo of his bedroom? According to this TikTok, the answer’s yes.

TikToker @jsxhxa sparked debate after sharing a photo she was sent by a seemingly single guy. The picture shows a white-sheeted bed with a TV in the background, and on the corner of the TV stand, there’s a decorative sign with the word “love.” @jsxhxa’s caption reads: “Just when I thought he was being cute, you can’t tell me this is a man’s room.”

The implication is that this guy must already have a wife or girlfriend, purely based on the part of his bedroom visible in the photo.

Viewed more than 600,000 times in the past month, this TikTok provoked some strong opinions. “The white sheets were a tell all I ain’t never see men with white bedding!!” reads one of the top comments. “And no game console? Hmmmmm,” reads another.

“That room gives me female vibes all the way, from the white bedsheets to the decor,” wrote someone else. In a strange continuation of the discourse about straight men having horrible home decor, a lot of women seem to think it’s a red flag if a straight guy’s bedroom looks nice. Not because they don’t like it, but because they assume it means he’s already in a relationship.

Meanwhile other commenters suggested that the “love” sign might be a gift from a former girlfriend, or that he might be staying in a hotel or Airbnb.

However there were a few detractors, suggesting the possibility of reverse sexism in @jsxhxa’s original TikTok. Is it really that suspicious for a man to have clean bedsheets? “I’m a dude who loves cute decor like that, so there’s a chance he might too,” wrote one commenter. “alway communicate your anxieties in ur relationships bro. you got this.”

The Daily Dot has reached out to @jsxhxa via TikTok comment.