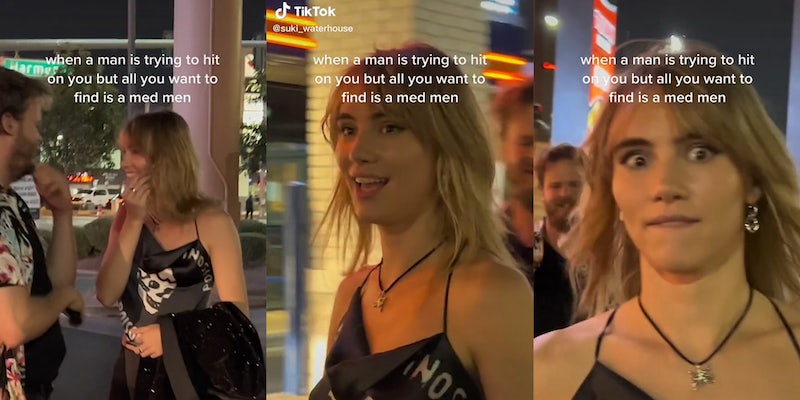 ‘When he finds out who her boyfriend is he is going to be in shock’: Suki Waterhouse tells guy hitting on her she has a boyfriend. (It’s Robert Pattinson)

'The fact that he thought he had a shot with you ummm sir?!'

Suki Waterhouse’s latest TikTok is a unique crossover between relatable content (getting hit on by some random guy in a parking lot) and an A-list celebrity plot twist.

Captioned “when a man is trying to hit on you but all you want to find is a med men,” the TikTok—filmed by Waterhouse’s friend—shows the actress/model outside what appears to be a gas station at night. A young man is trying to talk to her, and as she jogs away, she shoots the camera a “yikes” expression. He’s persistent enough to try and get her number even after she tries to leave the conversation, but she shuts him down, saying, “Oh no, I have a boyfriend.”

The punchline, of course, is that Suki Waterhouse’s boyfriend is none other than Robert Pattinson.

Waterhouse and Pattinson have been dating since 2018, moving in together during the pandemic while Pattinson was filming The Batman. It’s a serious relationship, but since Waterhouse is a less famous face than Pattinson, it kind of makes sense that this man wouldn’t recognize her on sight.

This TikTok obviously blew up, with people making fun of this average-seeming dude for hitting on the girlfriend of an A-list star. You almost have to feel sorry for the guy—although he did ignore the very obvious signal of Suki Waterhouse literally walking in the opposite direction after he tried to talk to her. Most women don’t like it when guys approach them in gas station parking lots at night!

The comments section for Waterhouse’s TikTok was predictably brutal, as people cracked jokes about her dating Batman and/or Edward from Twilight. “i would pay BIG money to see that guys reaction when he went home and googled who her boyfriend is,” wrote one.

“you dont have A boyfriend, you have THE boyfriend bestie,” wrote another commenter, while others made fun of the man’s confidence: “The fact that he thought he had a shot with you ummm sir?!”

It kind of sucks that one of the most effective ways to avoid unwanted male attention is to say that you have a boyfriend. This guy really should’ve picked up on the signals earlier. But there’s no denying the payoff here was pretty hilarious.