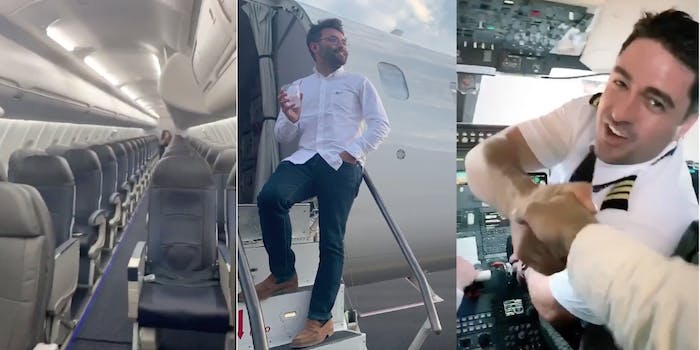 No, that guy didn’t really fly alone on a Delta flight

He duped the internet.

On Aug. 12, a man named Vincent Peone shared a video of himself boarding a plane all alone, alleging that Delta Airlines gave him his own private flight after his trip from Colorado to Utah was rescheduled.

“Last week Delta gave me my own private jet…kind of,” he wrote on Twitter.

Last week @Delta gave me my own private jet…kind of. pic.twitter.com/p14OGLw1jv

In the video, Peone is seen getting VIP treatment from Delta employees as he is called to board and personally escorted onto an empty plane.

The video immediately went viral, with thousands retweeting the post and news outlets picking up the story, reporting on the “lucky” guy who snagged the special experience. Even Adweek published a piece, titled, “Here’s How a Delta Frequent Flyer Got His Own Private Jet,” which included an interview with Peone.

The only problem? Well, the plane never really took off.

In a tweet on Thursday, Vincent–who is a director and former CollegeHumor writer–explains that he did board a plane, but it never really took off.

“Thank you Delta for an awesome experience last week. My video was 100% true… and then I stopped filming. After the private jet broke down again with mechanical problems, I took a normal one the following morning. The footage I have tells a short, funny and positive story- because those are the kind of stories I like to tell. I make Comedy! Consider it the Director’s cut. I had some laughs with the amazing crew while living the dream. The story took off fast, but the plane didn’t.” he wrote.

Most users laughed off the whole thing, but some were actually upset over Peone’s “deception.”

“Kind of twisted deception…..only claims to be ‘comedy’ when caught in lie,” one user wrote.

Kind of twisted deception…..only claims to be “comedy” when caught in lie.

" I just wanted to be famous and gain subscribers on social media so I didn't include that fact. Now that I have been exposed, here I am trying to make an excuse for leaving that out."

However, the humor in the video is pretty hard to miss.

“In your professional opinion, has anyone ever flown alone on a plane before?” Peone asks an employee while being escorted down the tarmac.

When she responds yes, he says he is going to delete her answer from his video (he doesn’t). He also jokes with baggage handlers while boarding.

“So we’re just adding weight to the plane because there are no people,” he yells at a worker carrying big yellow sacks. She responds with laughter.

In the end, both Delta workers and the internet got a laugh–even if it was just momentarily–so it seems like Peone accomplished what he claims he set out to do.