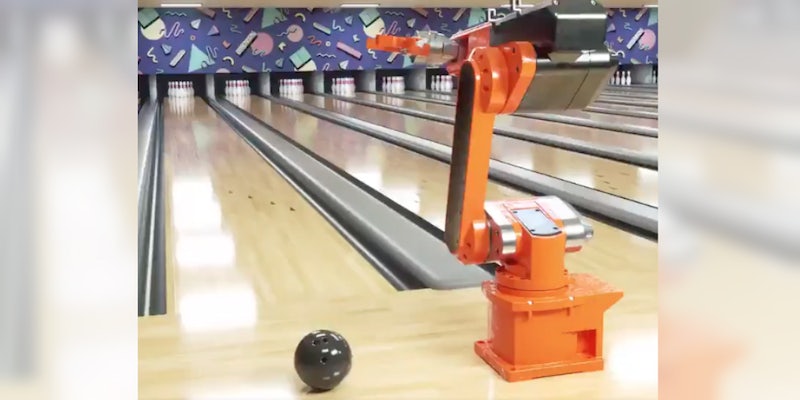 A now-viral video appearing to show a robot aggressively bowling has convinced many that, well, robots are now bowling champs. The video, however, is entirely computer-generated.

The clip, shared earlier this week by motion graphics artists Tom Coben on Twitter, features a robotic arm earning a flawless strike after hurling a bowling ball down the lane.

Amassing more than 16 million views and 72,000 retweets thus far, the tweet seemed to convince many that robots have suddenly been taught to dominate the bowling world.

Oh for fucks sake I seriously thought that was real, I bout had a heart attack

Despite Coben including countless hashtags signifying that the clip was merely a 3D animation, an onslaught of confused onlookers forced him to reiterate his point.

“I guess I should mention that this is a render, not a real bowling robot,” Coben added.

I guess I should mention that this is a render, not a real bowling robot.

Others were quick to point out that bowling robots actually do actually exist. Though, they are not quite as terrifying and violent as the one seen in the video.

While most people are likely able to distinguish the first robot as fake, the video shows that many can still be fooled, especially as the ability to create realistic computer-generated videos becomes more commonplace.

Hey @BostonDynamics we love what you do. If you have a few minutes, we would love for you to check out new parody video which is a tribute to all the great work you do! https://t.co/NNc5oocY8A

That same month a video of an absurdly dangerous looking amusement park ride also spread online, although, as you guessed, it was also fake.