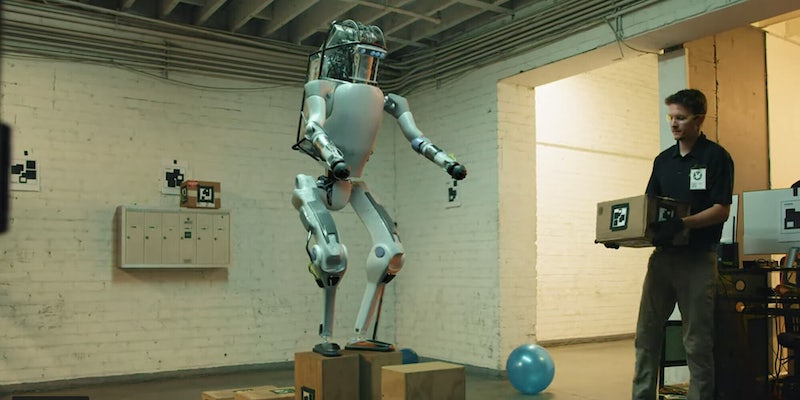 No, that video of a Boston Dynamics robot attacking its creators is not real

A video appearing to originate from Boston Dynamics, a company known for its human-like robots, has gone viral for showing one of the group’s creations attacking humans.

Thankfully, the video is not real.

The footage first began to circulate on social media Friday and was viewed more than 15 million times in one tweet alone.

The clip starts with “Atlas,” one of Boston Dynamics bipedal humanoid robots, being run through a series of tests while its creators attempt to knock it off balance.

The robot is attacked with increasingly absurd items, from hockey sticks and rubber balls to a glass bottle and a steel chair.

Fed up with its treatment, Atlas eventually fights back, beating up the two humans before holding them at gunpoint.

Many people online initially believed the video was real, expressing horror at both the treatment of the robot and its ability to attack people.

The amount of people who think this is real just goes to show how good @CorridorDigital is.

People may have been fooled because the video mimics actual Boston Dynamics tests.

In 2016, the engineering company released a video showing its employees shoving a robot with a hockey stick to display its balance and recovery abilities.

So if the video isn’t real, where did it come from?

The impressive clip was produced by Corridor Digital, a group that has racked up more than 6 million YouTube subscribers thanks to their special effects skills.

Hey @BostonDynamics we love what you do. If you have a few minutes, we would love for you to check out new parody video which is a tribute to all the great work you do! https://t.co/NNc5oocY8A

Another video released by the team shows exactly how the robot was faked: a mix of motion capture and computer-generated imagery.

Everyone should be able to sleep better knowing that robots haven’t risen up to destroy humanity and take over the world. Yet.