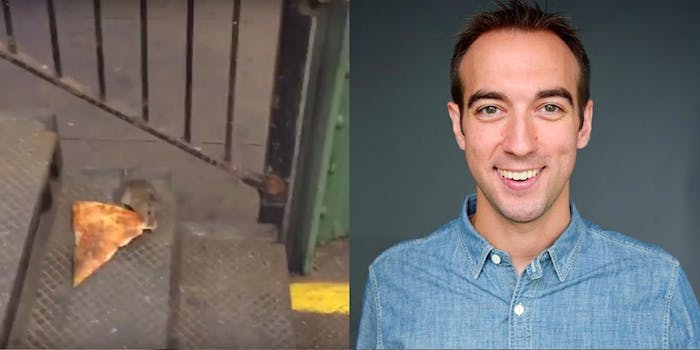 Behind the scenes with the human who met Pizza Rat

Behind the scenes of an instant legend.

On Monday, a star was born. Pizza Rat became an instant celebrity when video of him dragging a slice of New York pie down some subway stairs was uncovered, captivating the hearts of the world.

A quick refresher on the moment that will go down in vermin history:

But soon, many began to wonder who was responsible for the creation of such a legend. That creator is Matt Little. The Daily Dot caught up with the man behind the rodent.

Daily Dot: Why don’t you go ahead and just set the scene of when you came across Pizza Rat.

Matt Little: My friend Pat and I were coming back from the UCB Theatre in the East Village, where we had a show at and also work at. We had just closed the theater down and we were were heading back to the L on First Ave, since we both live in Brooklyn. We were both walking down the stairs where we saw the rat grab the slice and was heading down. The third stair was when I started shooting it. He had an even longer journey from before. There’s a whole prequel.

So where was he coming from?

I would guess he probably has some decent taste. He was probably coming from a place like Artichoke. And if that’s the rat I think it is, then there were four turtles that went hungry because he left that piece of pizza lying on the stair.

Oh yeah, I saw in the video description that you think it might be Splinter from Teenage Mutant Ninja Turtles. I thought he’d be bigger IRL?

The camera adds ten pounds, that’s the thing. I also shot it in portrait mode, so it might have looked a little skinner.

Did he steal the pizza?

Oh no, he paid for it. He respects the commerce.

So he ends up dropping the slice, and that really bummed me out. What’d you think of that?

It was a downbeat ending. The original ending had him going home, but he had to take it back for reshoots. He did the best of what he was given. Life gives you what you can handle, and he did the best with it. I like to think the pizza is half-full.

Do you know if Pizza Rat has booked any TV appearances?

What’s amazing is that you’re the first person to ask me about it, they’ve actually called me looking for the rat’s number. I don’t know if they’ve gotten in touch with him. He took off before I could ask any questions. I don’t know if he understood English, or maybe he was just rude.

What do you think Pizza Rat’s family thinks of all the fame?

I think they’re wary, they’re cautious, because fame changes a rat. Even if you’re the most down-to-sewer rat there is, fame is going to change you. And I think they’re excited but nervous of what this is going to do to their rat king.

Was the crust gluten-free?

I think that it was, because if you notice, he’s sort of exercising with the slice. I don’t think you want to fill up on empty calories while you’re burning fat. And also that’s the hottest trend, gluten-free.

How much CGI was used in the making of Pizza Rat?

I want to go on the record and say this was 100 percent practical effects. I’m a firm believer in the unaltered original Star Wars trilogy and The Dark Crystal. People might think this is CGI, but this is 100 percent real, but the cheese was fake.

As a performer, what was Pizza Rat’s opinion on this year’s Emmys?

I think that he took a look at those Emmys and thought about how it was another year without a win and it’s time to work harder. He’s probably going to fire his publicist.

Oh man, that’s a great question. I want to say Hillirat Clinton. Either her or Bernie Sanders, because he feels that the housing problem in New York, let alone the rest of the country, is out of control—and someone has to stop it. Otherwise we’re all going to end up in a rat race.

Is there anything you’d like to say to Pizza Rat now?

Wherever he is right now, I hope that he’s living his best life. And I hope he knows he’s the hero that this city deserves.