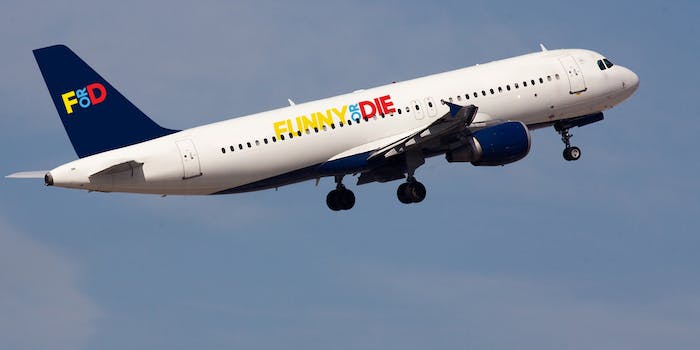 Is this airline’s social media meltdown actually a Funny or Die stunt?

This airline's social media meltdown isn't all that it seems.

Airline Twitter accounts have a long history of high drama and entertaining social media meltdowns, and the account for ‘Mallard Air’ seems to be no exception. Or is it?

Mallard Air is supposedly launching as a budget airline to control the skies above the Midwest very soon, however no website exists in their name. Their Twitter account, however, is incredibly active, and has been since the beginning of May. Immediately things began to look a bit fishy.

Mallard Air is prepared for takeoff on Twitter! Come fly the friendly skies with us!

Supposedly the account is the daily travails of someone called Doug, who Mallard Air poached from BuzzFeed to become their social media manager.

Ugh, come on guys, interact with the MA account! This never happened at Buzzfeed!

Things began to become suspicious when the nascent airline began to have a supposed Twitter fight with Lift, a life coaching app, after Mallard threatened them. “Doug” had actually meant to tweet Lyft, the ride sharing app, but it was too late.

Remember when people yelled at BIG TAXI for trying to squash @liftapp and @Uber, don’t look now, but it’s happening to us, but by them!

What came next was demands from Mallard to Twitter users as well as the Lift account, pleading with them to remove retweets of any of the threats, as Doug might lose his job over it. However, Lift has apparently never interacted with the airline on Twitter at all. The Daily Dot contacted Lift, who confirmed that they have never interacted with the Mallard Air account on Twitter.

I just found out there’s no way to legally can make anyone take down tweets, but can you guys tweet @liftapp and ask please?

So who is behind this parodical social media meltdown? Well, all signs point to a serial prankster. Mallard Air’s first follower is Danny Jelinek, the director of Funny or Die’s infamous hoverboard prank. His latest tweet is a retweet of Mallard Air from May 2nd. The airline’s second follower is a writer for Funny or Die, and the account itself follows more than a dozen other assorted Funny or Die writers. The Daily Dot reached out for a response from Funny or Die, although we haven’t yet received a reply.

What’s next for Mallard Air? Well, it looks like they’re gearing up for a big announcement today. And if Funny or Die is indeed behind the account, then that announcement could be very interesting indeed.

Just got a VERY exciting email from the higher ups about a BIG partnership. Will announce tomorrow!!!!

Update: Mallard Airlines emailed the Daily Dot assuring us that they are “a real airline twitter” with “no association” to Funny or Die. They claimed to have blocked both Funny or Die writers, although this hasn’t yet taken place.

Muckraking “journalists” at @dailydot have my name tied to some fake Twitter account thing. I don’t do that stuff. https://t.co/7l9XFt9DlM

Update #2: Funny or Die has finally revealed that Mallard Air is indeed a long-running prank connected to their latest video, a spoof music video by Chromeo.

Photo via Flickr/Pinguino (CC BY 2.0) | remix by Jason Reed