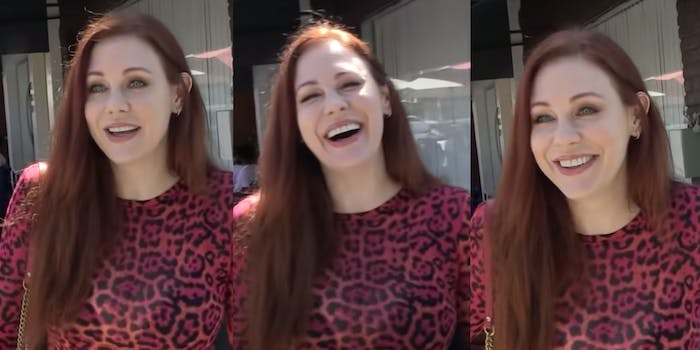 The former Boy Meets World star announced her initial foray into the adult film industry in Oct. 2019, when she made her debut in Drive. Since then, she’s joined the popular content subscription service OnlyFans, where she’s been raking in 6 figures a month, according to a chance interview with TMZ.

Ward ran into a TMZ reporter outside a restaurant on April 4, Yahoo notes. When they inquired after her pandemic activities, Ward noted that she’s been “inside, on my webcam.”

When asked about how her journey into OnlyFans has gone, Ward called it “absolutely amazing.” She noted that the pandemic has kept people indoors, which has lended to the success of her OnlyFans page.

“I feel very fortunate because I, you know, get 6 figures a month from OnlyFans,” she said. Revealing that she is currently raking in more money than she ever has before, Ward pointed to OnlyFans, along with her previous adult film work, as her primary income sources.

Ward’s recent uptick in acting gigs is not exclusive to the adult film industry. She will be making her television return via a sitcom called The Big Time, and may even consider dipping her fingers into producing at some point in the future.

On Boy Meets World, Ward played Rachel, a character added to the cast in season 6. You may remember her as the roommate of Shawn’s brother Eric.

Speaking with the New York Post, Ward said she is looking forward to a bright future in mainstream media as well as the adult industry.

“I want to slay both industries,” Ward said. “I love and embrace both. Me being bold and free in my sexuality and so out there with it has really given me that power. When I was like this innocent flower, I was letting everyone else dictate what I should do or what I should be.”