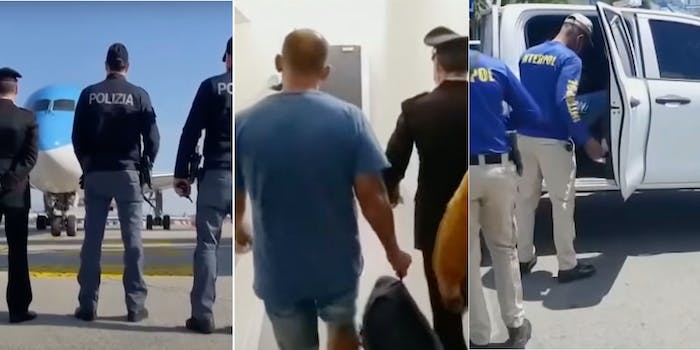 The fugitive had kept a low profile in the Dominican Republic ... except for the YouTube videos.

An alleged mafia member, who had evaded calls for arrest since 2014, inadvertently led police his way through cooking videos he posted to YouTube.

Marc Feren Claude Biart, 53, was arrested in Boca Chica, a Dominican Republic beach town that is a popular destination for Italian tourists. Biart and his wife had settled there by way of Costa Rica, according to the Washington Post.

Biart and his wife had managed to keep a low profile in their new adopted hometown, with its Italian ex-pat community considering the couple “foreigners.”

But the alleged Mafia member couldn’t keep a low profile online, reportedly posting videos in which he showcased his Italian cooking skills.

Though the videos didn’t show Biart’s face, Interpol and Italian police, working together on the arrest, used the videos to track Biart thanks to another of his passions—distinctive tattoos on his hands.

Biart, believed to be a member of the ‘Ndrangheta crime syndicate based in southern Italy, is wanted for drug trafficking crimes. According to the Post‘s article, Biart was arrested Monday at Milan’s Malpensa Airport after arriving on a flight from Santo Domingo, the Dominican Republic’s capital.

The Guardian noted the ’Ndrangheta is based in Calabria—the region forming the tip of Italy’s “boot”—and is regarded as one of the world’s most powerful crime organizations “because of its control of most of the cocaine entering Europe.”

It adds that the syndicate has “long surpassed Sicily’s Cosa Nostra as Italy’s biggest mafia organization” with an international reach, with the Post‘s article noting, “Officials have traced cocaine deals and murders in its home base in Calabria … to hundreds of mobsters across three continents, from a local mayor and police chief up to a former member of Parliament.”

Biart’s arrest clearly adds to the narrative of the international search, while presenting a plot twist and a valuable lesson to other fugitives.

It is unclear whether the videos are still online; The Daily Dot was unable to independently confirm their existence, but is hungrier for having searched.