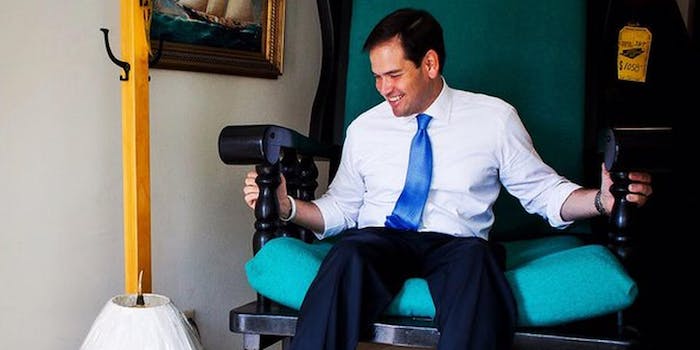 It began with an awkward photo. You can guess what happened next.

Marco Rubio is having a rough week. Donald Trump lashed out at the Florida senator during Thursday night’s debate, calling him a “little guy” and “little Marco,” and Rubio’s showing in Saturday night’s primaries was similarly small. The Internet, never one to sympathize with floundering politicians, responded by Photoshopping tiny versions of Rubio into unusual settings.

The Photoshops stem from an image snapped by Elizabeth Frantz while Rubio visited a furniture store in New Hampshire last August. Like every other picture with inherent comedic dimensions, it has since become a meme.

AIDE: he’s calling you “little Marco”RUBIO: what if i sit in this huge chairAIDE: no, why would you—
RUBIO: weeeee pic.twitter.com/kQOBB3aVpn

And because no meme would be complete without it, here’s the Game of Thrones reference.