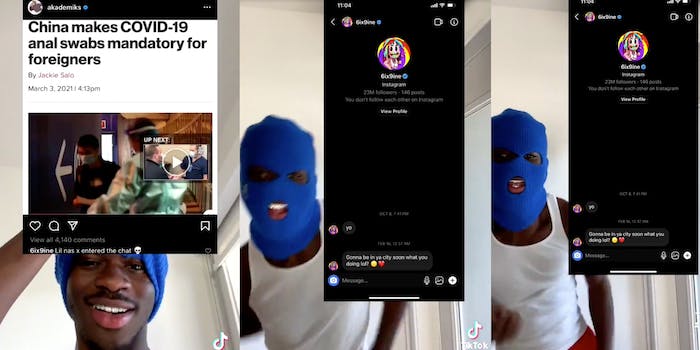 The rainbow-haired rapper allegedly tried sliding in Lil Nas' DMs more than once.

Dancing to one of his own songs, Lil Nas X addressed the comment with shade of his own. “This you?” he asks, sharing a screenshot of his DMs with 6ix9ine that showed two separate messages from the rapper that garnered no response.

“Yo,” the rainbow-haired rapper wrote in October.

“Gonna be in ya city soon what you doing lol?” he wrote in a message reportedly sent in February. The last message is followed by a heart emoji and an upside-down smiley face.

6ix9ine later responded to Lil Nas X’s attempt to expose him in an Instagram video. “Before this shit even start, we gonna nip this in the [bud],” he says.

He then shows his own Instagram DMs and tries to prove he has had no previous interactions with Lil Nas X. So it’s possible, Tekashi got a dose of his own trolling medicine.

Lil Nas X has yet to comment on 6ix9ine’s response video.