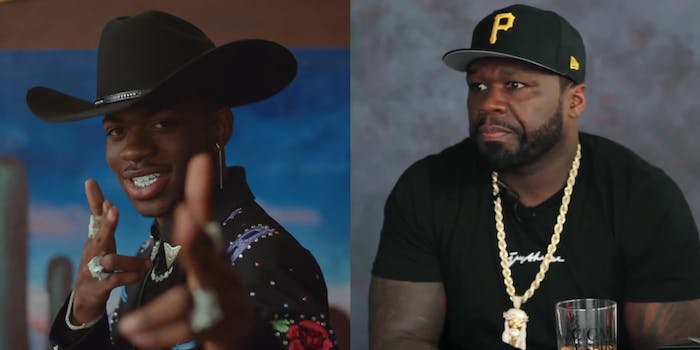 'It’s the homophobia for me, straight men are SO INSECURE it hurts.'

The “Old Town Road” artist cut no corners in replicating the look Minaj sported in her music video for “Super Bass.” From hair to hips to ice motorcycle, Lil Nas’s Halloween getup has got to be one of the best and most iconic we’ve seen from a celebrity so far this spooky season.

But not everyone can get behind the rapper’s look.

Ever since Lil Nas came out as gay in 2019, he’s faced pushback from the less tolerant corners of the hip-hop community. This time around, it was 50 Cent giving the rapper a hard time.

In 2019, 50 Cent took aim at former collaborator Young Buck for a relationship he allegedly had with a transgender woman. He dragged that whole controversy back up and pulled Lil Nas into it with a now-deleted Instagram post again sharing the Nicki costume photos alongside the caption “I think young Buck & lil nas x might make a love connection, if he get a BBL.”

Lil Nas clapped back at 50 in a tweet that has also been deleted, asking him “why u in barb business?” “Barb” is the term super fans of Minaj use to refer to themselves.

Fortunately, fans had Lil Nas’ back, calling out 50 for the lengths he’s going to in an attempt to diss someone over an amazing costume. “Mm it’s the homophobia for me, straight men are SO INSECURE [it] hurts,” wrote @desyperks.

“You saved the pics and made a collage,” @luckyu925 pointed out.

Lil Nas has always been skilled at casually refuting some of the homophobic shade that gets thrown his way, and he also took a moment to respond to one user who was worried about the impact seeing his amazing costume would have on their children.

“Yes because ur child is gonna say ‘lil nas x dressed up as nicki minaj so why should i worship god anymore,’” he replied to the now-deleted tweet presumably pearl clutching over the outfit.

It seems like just about everyone is deleting their shady tweets and Instagram posts, but Lil Nas X’s fierce “Super Bass” look is here to stay this Halloween.