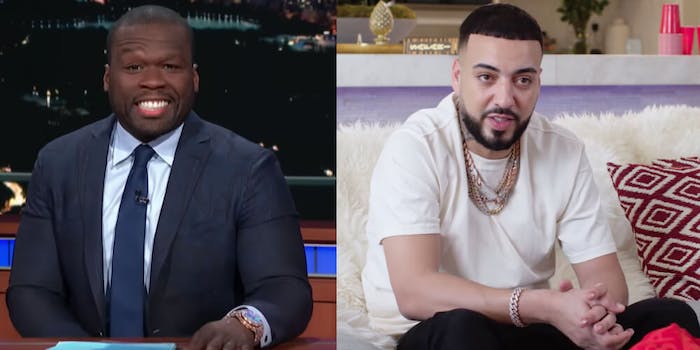 50 Cent and French Montana’s rivalry on social media has taken a serious turn.

The two rappers have been feuding ever since 50 Cent accused French of pretending to own a new Bugatti when, 50 Cent alleged, the car is actually under a 10-year lease. 50 Cent then claimed that French was faking his streaming figures.

French is not going down easy, because he just hit back with what may be a game-changer.

In an Instagram post on Tuesday, French accused 50 Cent of being a government informant and claims a document he uploaded is proof.

“Where I’m from it doesn’t get no worse than this,” French started his post, which includes “legal documents” that he insists backs up his claim. “A real life Rat. WOWWWW 59 is a government informant and here’s the paper work to prove it!!! I swear this my last post. This beef is over. He already called the system on me!! I had to put the nail in the coffin. How can you support anything this guy do. Like father like son. His name is highlighted just incase you can’t find the dinosaur.”

The released document describes a crime committed on March 24, 2000, and names Curtis Jackson (50 Cent‘s legal name) as the informant.

Adding fuel to the flames French also previewed a new song dissing 50 Cent on the post.

This is not the first time 50 Cent has been accused of being a snitch. Last year, rapper Ja Rule also made the same claim.

There has been no response to the new allegation nor has 50 Cent responded to the diss track.