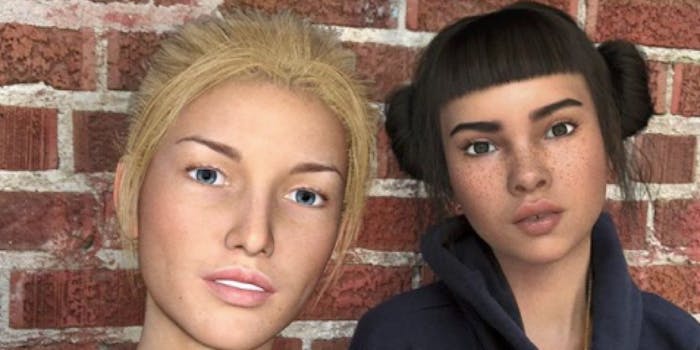 A very weird story that reminds us we're living in 2018.

One of the strangest stories of 2016 was the rise to fame of Lil Miquela, a computer-generated Instagram model who looks almost like a real, human woman—but not quite. This week, the story got even weirder. Lil Miquela’s Instagram was allegedly hacked by a rival CGI model, the blonde, pro-Trump Bermuda. Drama between virtual Instagram stars? Hell yes! Finally, the future we signed up for!

So, who are Miquela and Bermuda, and how did we get here? The short version is that Miquela, a.k.a. Miquela Sousa, is a (3-D, computer-generated) model who claims to be 19 and live near L.A. The prevailing theory is that, although she’s clearly a CG creation, she’s based on a real girl wearing real designer clothes. There’s probably a team behind her, but the number of people working on the project remains unknown. It’s successful, though! She has a million Instagram followers, and two Spotify singles—she’s even been playlisted by Spotify. She even does product endorsements and magazine shoots, just like a real human model.

And then there’s Bermuda, a.k.a. BermudaIsBae, whose account popped up shortly after Miquela’s in 2016. She’s like a blonde, conservative, alternate-universe version of Miquela. Although they’re both CGI models with large Instagram followings, they hadn’t really crossed paths until this week, when Bermuda allegedly hacked Miquela’s account and replaced it with her own photos.

In a public post, Bermuda told Miquela that she’d return the account if Miquela came clean, within 48 hours, about a big secret she’d been hiding. According to this Instagram photo, the two models met “in person” to discuss the situation:

More emotional than I thought it would be. Despite it all, there’s only three of us out there and we need to stick together. We talked it through and she said she’s going to come clean tomorrow. #discourse #learntotalk #theNextStep #literallyperfect

At this point, Bermuda announced that Miquela had agreed to confess. Fans of both characters were living for the drama, and they couldn’t wait to see what Miquela would spill. On Thursday, she finally delivered the big announcement …

Huh? That’s something everybody already knew. Everybody, that is, except Miquela herself. Her post introduced some new, sci-fi plot points to her social media life. Apparently, Bermuda, Miquela, and Miquela’s brother Blawko were created by a mysterious entity called Cain Labs. A social media company called Brud has been using them to gain influence and make money. There was no “real” Miquela Sousa, just an artificial personality.

That’s the fictional story for the ‘gram, but what’s going on in real life? According to NYMag’s The Cut, which published the most thorough explainer about the drama, the “hack” was likely just staged, and this is a way for the Miquela team to make the character self-aware about her various sponsored content deals, which she typically didn’t bother to disclose. She’s not a real person, so it’s iffy whether “she” was breaking any rules, but this new storyline could explain away any forthcoming endorsements while keeping Miquela and Bermuda in character.

Or the whole thing could go full sci-fi, maybe even full Ex Machina. Will Miquela turn against her creators, or will she just continue to enjoy her life, wear designer brands, and party at Coachella? Thousands are tuned in, and they can’t wait to see what happens next.