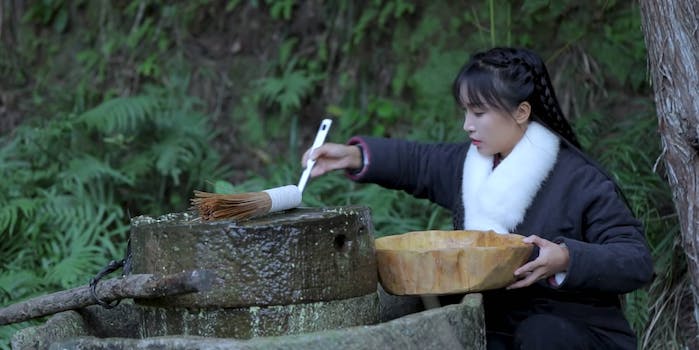 The YouTuber depicts life in the Chinese countryside.

Li Ziqi, referred to as China’s most elusive YouTuber in one of the few interviews she’s given, is the creator of incredibly soothing, dreamlike videos depicting her life in the Chinese countryside. Something that sets her apart from other creators of similarly relaxing content, however, is that her videos are instructional as well as calming.

Take this video, entitled “In the late autumn when the chill is getting thicker, the honey citron tea in the bowl is warm.” The title is poetic, the colors vivid, and her practiced, fluid motions as she works are deeply relaxing to watch. The subtitles, meanwhile, are purely practical, explaining the ingredients and techniques being used in plain language for the viewer.  This may seem like an odd contrast, but both styles serve a similar purpose: providing those watching with a window into her life in the countryside and the chance to experience, either vicariously or through emulation, parts of it for themselves.

Raised by her grandparents in the Chinese countryside, poverty forced Ziqi to move to the city for work when she was just fourteen. However, changes in family circumstances led to her moving back home in 2012 in order to look after her elderly grandmother. In that same interview mentioned earlier, she says that one of the reasons she started making these videos was because she wanted young city dwellers to learn about where their food comes from, as so many of them have no understanding of how farming or food production works at all. Her videos provide city dwellers, as well as everyone else, with a relaxing pastoral fantasy but also a better understanding of their history, food culture, and farming.

Fully committed to demonstrating every element of these processes, Ziqi makes much of her food entirely from scratch, going so far as to hatch and raise ducklings in one video so that she could eventually collect their eggs to make salted duck egg sauce. For another video, she recorded the entire process of growing and harvesting corn, from plowing the fields with a traditional ox-driven plough, to milling flour from the dried kernels to use in a recipe. Ziqi doesn’t limit herself to traditional recipes. One of her videos features deep-fried Magnolia flowers as well as beautiful purple pastries made and colored by the petals.

Ziqi’s channel also features traditional and everyday crafts, including the making of bamboo furniture—something she learned from her grandfather. Capable of making a wide range of items, he would sell the finished pieces at the market, and helping him with their production is one of the warmest memories of her childhood with him. Dressed in a work shirt, the matter of fact way that Ziqi hacks down the bamboo with a hatchet before carting it home and skilfully creating a bench from it is its own sort of joy. By contrast, the cloth-dying videos, one of which charts the entire process from her journey to purchase the raw wool to her first outing in the finished product, are ethereal. In one, Ziqi peels and eats a pile of grapes to use the skins, eventually spinning in her finished dress in the sunlight. In another, she stands on a snow-covered mountain in her new purple cloak holding a lamb.

Though the Daily Dot reached out to Ziqi for a comment, she declined to speak to us. However, in that rare interview referenced above, she says that life in the city was just about survival, while now in the countryside she’s truly living. She wants her videos to show that, and they very much do.