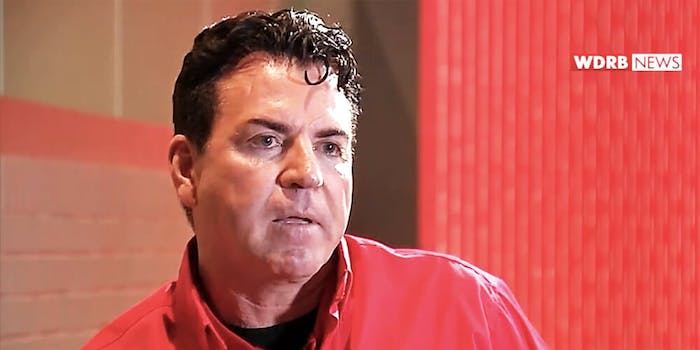 Homeboy needs to lay off the garlic butter sauce.

It’s been just over a year since “Papa John” Schnatter was forced to resign as chairman of the Papa John’s Pizza board of directors in July of 2018, following media reports that he had used an N-word on a conference call the previous May. And if anyone was wondering how Schnatter has been doing since he was ousted from his own company, the answer is just fine.

In a (rather terrifying) new interview with a local Louisville Fox affiliate, Schnatter has broken his silence over the controversy and the former CEO believes that he was set up. Oh, and this thing goes all the way to the top—almost like an alleged pizza-gate, you might even say!

“Oh, there’s no question about it. And the public knows it. This is all a farce,” Schnatter said, speaking with WDRB reporter Stephan Johnson. “They fabricated it, shame on them.”

He had particularly harsh words for former CEO Steve Ritchie, who took the reigns after Schnatter previously had to step down over his other NFL controversy the year before. “Steve Ritchie … the board of directors all used the black community and race as a way to steal the company,” Schnatter continued. “They stole the company, and now they’ve destroyed the company.”

As to how they’ve destroyed the company, which is now being run by former president of Arby’s Rob Lynch, well … That’s where things veer down into the conspiracy well.

“I’ve had over 40 pizzas in the last 30 days, and it’s not the same pizza,” Schnatter claimed, wildly. “It’s not the same product. It just doesn’t taste as good. “The way they’re making the pizza is just not fundamental to what makes a Papa John’s pizza.”

In fact, the whole thing was so bonkers that journalist Timothy Burke compiled the best parts into a convenient 26-second soundbite.

Between the copious sweat and dry mouth noises—which can only be a result of eating 40 pizzas in 30 days—this is not the beaming Papa John we used to know from our pizza boxes. And what was that he said about a day of reckoning??

papa john has fucking HAD IT https://t.co/6khz6avpSL

With the sound off, this just looks like an ad for Hell. https://t.co/wMhYWTZoyS

The way he laughs after makes it feel like a horror movie https://t.co/JL3JlJ0zmG

I wish there was a way to watch this with the mouthsounds off https://t.co/7pPVRjCXjZ

Papa John The Pizza Man: “The Day Of Reckoning Will Come” https://t.co/XvcHlMMUfZ

“This footage is from the Hell dimension in EVENT HORIZON,” wrote Patrick Monahan, evoking the 1997 sci-fi horror movie.

This footage is from the Hell dimension in EVENT HORIZON https://t.co/c8nwR9TMCT

And there were plenty of other jokes about the glistening, glossy sheen of sweat and/or oil covering Papa John’s skin.

“Papa John is slowly but surely turning into a breathing garlic knot,” wrote another user, of a possible side effect of consuming literal gallons of that butter sauce they give away with the pizza.

Papa John is slowly but surely turning into a breathing garlic knot https://t.co/AGh0xsrYCP

when you’re not allowed to make pizza anymore but you’ve still got all that olive oil to use up https://t.co/pbN2sFGREA

papa john is clearly on what we call the “elvis life trajectory” where you rule the world for a decade or two then turn into a disgusting sweaty monster who gets winded from watching sports https://t.co/YRQHiJlsnH

Why is Papa John so wet? https://t.co/Hy6ZYMb5Ek

“Homosexuality is an abomination!” shouted Papa John as he poured grease onto his head and called it a pizza. https://t.co/PCJvCKhci6

But perhaps the most puzzling thing of all: why is he still wearing a bright red button-down shirt??

just want to acknowledge his commitment to wearing gaudy red button downs even if they can’t have the papa john’s logo anymore https://t.co/vfTBFBTMCY

This is fine. Papa John is fine. Everything is just fine!