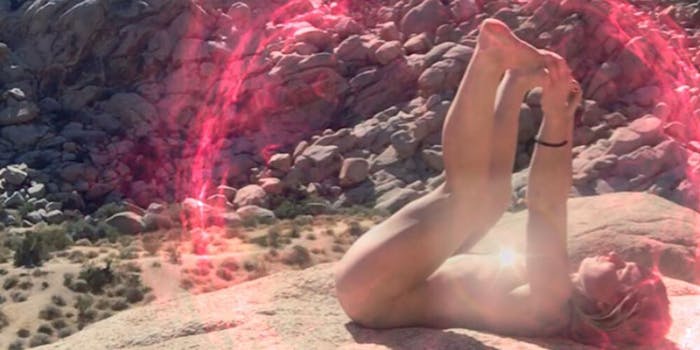 A viral Instagram post by a small-time Instagram influencer with a focus on “wellness” has the internet wondering what on earth anyone could gain from sunbathing their butthole.

It started with an Instagram post from Metaphysical Meagan, who now has nearly 10,000 followers. “For the past few weeks I have included sunning my bum & yoni🌺 into my daily rising routine,” Meagan wrote in the mid-October post.

A Twitter user posted screencaps of the post this week, saying, “People out here butt-chugging sunlight,” and it went viral. People made fun of the claims and wondered how when to expect mass reports of sunburnt anuses.

“It’s been around for a while!”

As Jezebel points out, other wellness websites cite “yoni sunning,” or exposing the vagina to sunlight, as an ancient Taoist practice. The Daily Dot’s search turned up one paper in the Journal of International Women’s Studies explaining yoga practices that focus on the yoni and women’s sexuality—but nothing about sun exposure.

But Meagan insists there are several benefits of spreading your legs to the sun, including “surges of energy,” improved sleep, better control of her “Life Force,” and “attracting a soul tribe & people who are on the same frequency and wavelength as me.”

Sunlight helps our bodies process vitamin D and has a number of other health benefits, including positive effects on mood. Experts suggest 10 to 30 minutes of sun exposure several times a week—easy enough to get on a short walk around the block. Metaphysical Meagan says the butthole is better. “30 seconds of sunlight on your butthole is the equivalent of a full day of sunlight with your clothes on!” she wrote.

There’s no scientific evidence to support the claim that your butthole absorbs sunlight faster than any other part of your body. It’s also good that Meagan limits her perineum sunning to five minutes because if she went for a little longer, she really could risk sunburning her “bum and yoni.” As she said in a follow-up post, “THE INTENTION OF THIS IS NOT TO TAN YOUR BUTTHOLE.”

If you keep it under 10 minutes and don’t accidentally expose your butthole to anyone without their consent, there is likely little to no harm in butt-chugging sunlight. But is it worth the risk and the potential backache from assuming the position?

If you still want to take Metaphysical Meagan’s word for it, it’s worth noting that she claims to be a “Reverse Aging Adept.” In addition, she and the person she says taught her about the benefits of perineum sunning both sell products for Purium, a multi-level marketing company famous for its “10-Day Cleanse,” which in 2011 was hit with a lawsuit from the Environmental Research Center for having unsafe levels of lead in several of its products.