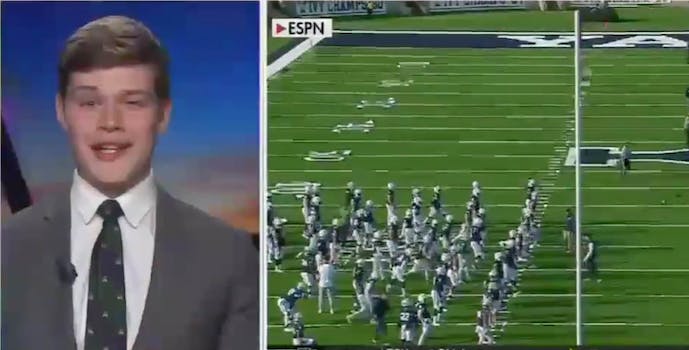 He got outed in an intimate way.

This year’s big Harvard-Yale football game was disrupted by climate change activists from both universities, who stormed the field at half time.

Chanting “disclose, divest and reinvest,” they sat down around the fifty-yard line, delaying the start of the second half while police and college authorities called for them to move.

The protestors wanted Harvard and Yale to end their investment in fossil fuels and companies holding Puerto Rican debt. While politicians like Sen. Elizabeth Warren (D-Mass.) tweeted their support for the protestors, not everyone was happy with their actions.

I support the students, organizers, and activists demanding accountability on climate action and more at #HarvardYale. Climate change is an existential threat, and we must take bold action to fight this crisis. https://t.co/lm1V6honI4

Chris Colby, Harvard student and Campus Reform Correspondent, went on Fox News to complain about how annoying the protestors are for mildly inconveniencing him in order to make a point.

On Fox & Friends, a Harvard student complains about climate activists storming the field at the Harvard-Yale football game: "They pick our favorite day and then they do whatever they want with it. I have to say, it's really quite annoying." pic.twitter.com/ZYpXo6WVyS

There were a lot of brilliant dunks on this guy.

The best of which came from his ex-girlfriend, Harvard senior Allison Chang.

If your ex-girlfriend taking your big TV appearance as validation of her decision to dump you wasn’t bad enough, Allison followed up with another tweet exposing Colby as a… picky eater.

he doesn’t eat out, but you already knew that

Allison, I'm sending my daughter to learn from you.

Of course it does! It’s an automatic byproduct. Reality will slap em in the face sooner or later.

I suppose something good has now come out of dating him.

Chang, a member of Divest Harvard, told the Daily Dot that while she was loosely aware of his politics when they got together, he hadn’t yet said “anything as egregious” as his comments to Fox News and she had been “trying to keep an open mind.”

However, once they got together she started “noticing some subliminal ways in which politics would influence things like communication and respect. Definite red flags,” which contributed to her decision to dump him.

i'm so sorry you dated this person but also so jealous that this is now your ex.

When asked how she felt about her new fame and whether she had any regrets about exposing him like that Allison said, “I was really nervous about posting the tweet, but the response has been so uplifting and positive!” and “I have no regrets at all.”

1000 LIKES i’d donate them all to @DivestHarvard