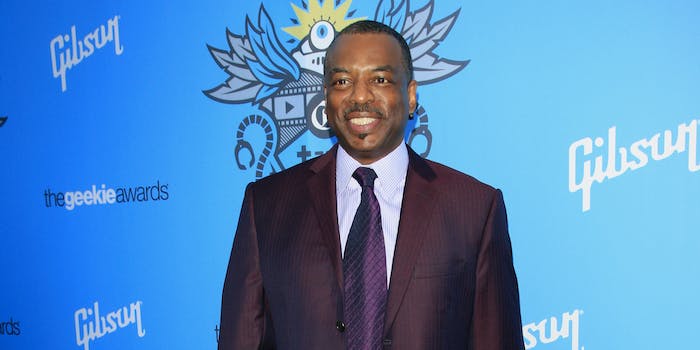 Fans have called for him to get the 'Jeopardy!' gig since November.

After months of fans campaigning and vocal support, LeVar Burton is finally getting his shot to host Jeopardy!.

Since January, several Jeopardy! alum, journalists, commentators, and celebrities have taken over hosting the show since January after the death of Alex Trebek, and on Wednesday, Sony Pictures Television revealed the final five hosts tapped to finish Jeopardy!’s 37th season. Alongside Burton (whose name fittingly included an exclamation point next to it), the final guest hosts will include Good Morning America anchors Robin Roberts and George Stephanopoulos, CNBC’s David Faber, and Fox sportscaster Joe Buck.

On Twitter, Burton shouted out Joshua Sanders, who first made the petition that kicked off the fan campaign to get him on Jeopardy! and thanked everyone who helped make his guest stint possible.

“YOU MADE A DIFFERENCE!” he tweeted. “Go ahead and take my word for it, this time.”

The campaign to get Burton to become Jeopardy!’s next host started just days after Trebek’s passing in November—and well before Sony Pictures Television first announced its rotation of guest hosts. Thousands of people signed a Change.org petition, and while Burton acknowledged at the time that nothing might come of the effort, “I can’t tell how much how I appreciate all y’alls love and support!”

For many, Burton made sense as the next host of Jeopardy!. He was already an integral part of their television experiences between his role on Star Trek: The Next Generation and the children’s program Reading Rainbow. He’s a longtime fan of Jeopardy!, and he’s been putting his name out there for years as a potential host once Trebek retired.

But when Jeopardy!’s guest host experiment began, Burton’s name wasn’t among the confirmed guest hosts. And as fans berated Jeopardy! for some of its guest hosts—Dr. Oz, who supported baseless COVID-19 conspiracies in 2020, was among the most controversial—and others were announced, fans also asked why it hadn’t gotten Burton to host yet.

He reiterated his desire to host Jeopardy! to USA Today’s The Mothership podcast, explaining that “I feel as strongly about my rightness for this as I did about Kunta [from Roots] and Geordi [from Star Trek: The Next Generation].”

“This is something that I really think is a good idea,” he said. “I think it’s a good fit of what the show is, what the show requires and what I feel like I bring to the table.”

For some of the hosts, a guest-hosting gig on Jeopardy! doubles as an audition for the permanent host role. Not every host might necessarily want it, but now that Burton—who is interested—is officially a guest host, people are already urging the show to make his appointment permanent.

Burton’s stint on Jeopardy! will air from July 26 to July 30.