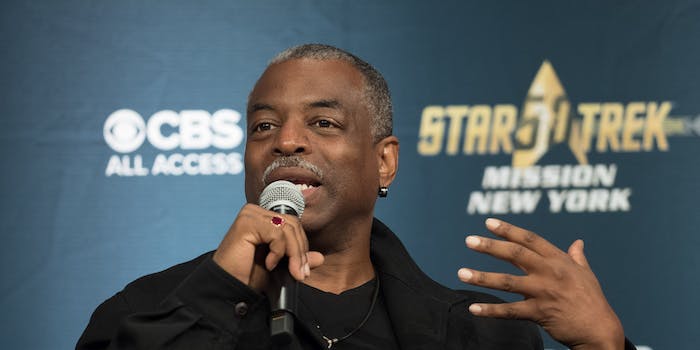 Alex Trebek was universally beloved, becoming a household name to generations of fans. It’s hard to imagine anyone replacing him as the new host of Jeopardy, but some people have already come up with an inspired choice: LeVar Burton.

Best known for his role in Star Trek: The Next Generation and his tenure as the host of Reading Rainbow, LeVar Burton is a perfect fit. His public image is all about being smart but approachable, and he definitely has the skills and experience to host a show like Jeopardy. He currently hosts a podcast called “LeVar Burton Reads,” where he reads a short story in each episode – appealing to adults who watched Reading Rainbow when they were young.

So, it’s no surprise that over 55,000 people have already signed a Change.org petition for LeVar Burton to become the next host of Jeopardy.

Will the petition make any impact on Jeopardy‘s hiring choices? Well, probably not. But Burton does seem like an obvious person to put on the shortlist. He also appears to be available and willing to do the job, which is a key detail here. Sharing the petition on Twitter, Burton wrote, “Even if nothing comes from it, I can’t tell how much how I appreciate all y’alls love and support!”

There’s plenty of speculation about who might fill Alex Trebek’s shoes, including former Jeopardy winner Ken Jennings, actress Rosie Perez (because she played a Jeopardy fan in White Men Can’t Jump), and, uh, Joe Rogan. But whoever it is, they probably need to be in it for the long haul.